U.S. Senator Charles E. Schumer called on the National Park Service (NPS) to provide $165,000 in federal funding to help rehabilitate the Town of North Hempstead’s historic Stepping Stones Lighthouse, which has fallen into disrepair. The lighthouse, which is listed on the National Register of Historic Places, dates back to 1877 and remains an aid to navigation as well as an important educational structure.

Schumer requested that the NPS provide federal funding so that the town can make critical repairs and prevent future deterioration of the lighthouse, ready the structure for rehabilitation and launch an educational campaign. The Town of North Hempstead will match the funding with $165,000 in local support and donations. An enthusiastic fundraising campaign has already raised contributions towards this effort.

“There’s no doubt about it, the Stepping Stones Lighthouse is a keeper whose future is on the rocks unless the feds step in and make this historic site a national priority,” said the senator. “That’s why I am pushing the National Parks Service to provide federal funding to preserve and protect the Stepping Stones Lighthouse—so it can be rehabilitated and remain a landmark structure on Long Island. A repaired and updated lighthouse will benefit the maritime community, the Town of North Hempstead and Long Island as a whole, and it will help educate the public about our region’s maritime history and preserve the stories of those who helped shape this community.”

Town of North Hempstead Supervisor Judi Bosworth appreciates the senator’s efforts.
“We are very appreciative of Senator Schumer’s support for the repair and restoration of our own Stepping Stones Lighthouse,” said Bosworth. “While the town has completed the replacement of the crow’s nest portal door and other small repairs over the past year, this funding from the NPS would allow us to address some of the major structural projects that need to be done. We are fully committed to restoring this local piece of maritime history and we are very hopeful that with Senator Schumer’s attention to this issue, our grant application will be accepted.” 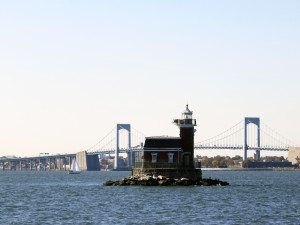 In 2008, the town acquired the lighthouse from the U.S. Coast Guard with the goal of restoring and using the property as an educational site for future generations. Over the years, the Stepping Stones Lighthouse has deteriorated. According to the town, foundation blocks at the riprap base have shifted outward and there is a crack in the basement floor wide enough to drop a fishing line through that leads to open water.

In addition, bricks have fallen from the crumbled chimney and debris from birds and shells litters the floor. Much of the pointing between the granite blocks is missing, endangering the granite foundation of the building. The brick and the granite around the northern top side of the tower are bowing outward, creating an instability of the floor in the lantern room, and water intrusion in the deteriorating gutters is destroying the roof edge and fascia, rapidly causing serious damage to the structure.

The town applied last year for the National Park Service Grant and has also been looking at a variety of other funding sources to help assist with the lighthouse’s refurbishing.

Stepping Stones Lighthouse was built in Second Empire-style brick in 1877 and was later modernized in 1944. The structure remains a vital aid to navigation today. The brick house and tower are constructed on a granite pier that rests on the outer edge of a rocky reef at the western end of Long Island Sound, at the mouth of the East River.

The lighthouse was listed on the National Register of Historic Places in 2005 for its association with the rise of the Port of New York in the late 19th century to become one of the world’s most important centers for maritime commerce. It is one of the last in the upper Mid-Atlantic region to be built of brick and stone, and embodies the distinctive characteristics of 19th-century lighthouse design.

The light marks a major hazard in western Long Island Sound and warns ships and boats of extensive shoals and a series of rocks—the legendary Devil’s Stepping Stones. The light station remains in its original location and, despite the deterioration that threatens the structural integrity of the lighthouse, the character and appearance are essentially unchanged from its period of significance.

Schumer urged NPS to provide $165,000 in federal funding through the National Maritime Heritage Grant Program to enable the Town of North Hempstead to undertake its Stepping Stones Lighthouse-First Steps to Rehabilitation Project. The senator explained that the Town of North Hempstead and Great Neck Park District have already taken some emergency measures to prevent further decay of the lighthouse, but funding is needed to halt the deterioration and prepare for the next stages of full rehabilitation.

According to the town, before any significant work can be done on the lighthouse, a temporary floating dock, ramp, boneyard and construction staging area must be constructed for safe access. Weather protection, shoring and bracing must be put in place to prevent further bulging and leaking of the tower’s west wall.

Remediation and general cleanup of the crumbling structure is also required before the more-involved masonry, metals and woodwork can be done to fully rehabilitate the building. These items, which are the general conditions for stabilizing the lighthouse and readying it for full repair, total $328,500. An additional $1,500 is sought for an educational campaign reaching broad audiences to generate awareness and engage the community in the rehabilitation of the lighthouse.

Overall, the project total is $330,000. Restoration will take place in partnership with the Great Neck Park District and the Great Neck Historical Society.

For more information or to support the lighthouse, visit the Great Neck Historical Society at www.greatneck historical.org.

To read more about its history, the efforts to save Stepping Stones Lighthouse and the residents who lived there, click here.

Learn about the legend and the recent boat trip to the lighthouse by clicking here.