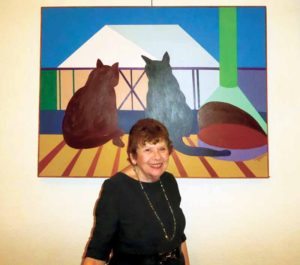 The Sear Festival for the Arts, held at Great Neck House this past May, was a treat for the eyes and ears. Charlotte Sear showcased her striking acrylics and photo collages. Dave Sear debuted his retrospective of Pete Seeger’s songbook, a clever and heartfelt assembly, starting with Seeger’s early days in the Army through his ever-optimistic view of the realization of human justice.

Charlotte’s color and design sparkled with her series of acrylics, using a naturalistic array of people and animals often gazing into space. Her painting “Walking the Dogs” is emblematic of the style, and features striking colors in strong opposition, as well as a wistful feeling of motion into the future. The motion is subtle, as all figures are presented flattened on the canvas with strong hues and a cubist style.

In recent years, Charlotte has turned to the desktop computer to assemble collages from a multitude of sources, including her own paintings, photographs and pictures from many sources. “Dancing with Mao” combines Andy Warhol’s Mao in an ironic combination with a sexy dancing woman, pointing to China’s transition from an ascetic society to a hedonistic future. According to Charlotte, the collages are computer-assembled layers and the jumble either works or it doesn’t. She said that instead of tossing the failed canvas to the corner, she just doesn’t press the save button—and poof, it’s gone. The survivors work in many ways, but Charlotte’s constructions only suggest a direction; she leaves it up to the viewer to piece together a story from the layers. They freely combine many elements that fit her original sense of design and color. Explore all of these elements on her website, www.charlottesearsweb.com.

Charlotte and Dave have lived together and worked in Great Neck for many years. Dave’s life’s work was cast at age 10 when Pete Seeger appeared with the Almanac Singers at the Little Red Schoolhouse in Greenwich Village. That long-necked banjo and Seeger’s wonderful songs inspired Dave to a lifetime of pickin’ and singing. 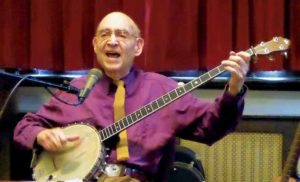 He soon joined Seeger’s teenage group, The Song Swappers, which included Mary Travers and Eric Darling, who all learned to combine music, justice and solidarity. Dave was on his way to singing across the country with his nationally renowned American Folk Trio and many other groups as well as solo performances over the years. While his repertoire ranges far and wide, Dave was uniquely connected to Seeger in style and interest, especially through his masterful learning of the art of frailing on the long-necked five-string banjo. Like Seeger, he sought out the sweet combination of gentleness and power in American folk music as he sought out justice and peace.

Dave played Seeger’s songbook with fun and authenticity and brought concertgoers back to the beginning, when a simple song like “Go Tell Aunt Rhody” transported listeners to the middle of mountain whimsy in the American folk ballad. “The Cumberland Mountain Bear Chase” showed audiences the driving power of the five-string banjo and “I Was Born in East Virginia” turned the song art to desperate love and so many other moods and passions. But, no Seeger showcase would be complete without Seeger’s moral compass, which served human justice for so many decades. It started with Woody Guthrie, where justice for the working man was the central dogma, and it touched the spirit of labor unions, politics and racial justice.

Dave chose his songs carefully, starting with the Almanacs’ passion for winning World War II, but rapidly moving to the glorious fight of the Lincoln Brigade with “Viva La Quince Brigada,” then workers’ and women’s rights with “Factory Girl” and onto “John Henry,” the ultimate labor hero, who beats the machine with his own hands—not just a real machine, but also a metaphor for the scheming exploitative boss. Next, his selections focused on racial justice, brought on by Harriet Tubman and the Underground Railroad with tunes such as “On My Way” and “Oh Mary,” Rosa Parks with “Back of the Bus” and Dr. Martin Luther King Jr. with “Oh Freedom.”

Seeger was a towering figure, bringing the people’s daily passions, triumphs and frustrations to the audience through the delicate yet powerful truths found in folk music and the folk process, which can turn a soul-stirring hymn into a whimsical ditty and back. Can one man thrill listeners with the gentle power of folk songs, move them with stories of injustice and inspire them with an optimistic expectation of human justice for all? Yes, Pete Seeger did. Can his disciple make listeners feel all of these things in an hour? Yes, Dave Sear did.

Jeffrey Levinton is a professor at Stony Brook University.