Twenty-one-year-old Scott Aharoni has lived here in Great Neck his entire life. The young Aharoni discovered his passion for filmmaking at Great Neck South Middle School in the seventh grade, where he was inspired by Mr. Gluck’s filmmaking class and the HTV news studio. Aharoni has just recently wrapped up filming his newest project, Bardo, this past November.

Aharoni directed and produced Bardo with his friend Dennis Latos. Aharoni said that the two met when they were both in middle school, although Latos didn’t attend Great Neck schools. Aharoni emphasized that his partnership and friendship with 23-year-old Latos is extremely significant to him. He said, “Over the last few years, [we] have developed a partnership where we direct, produce and edit all of our content including films, commercials—that have aired on TV—and music videos—that have been on MTV—together….We plan to create our own production company before the release of our first film together, Bardo,” he continued. “We feel that, together, we have a unique and ambitious directorial and editorial eye. We plan to continue to perfect our craft by telling meaningful and memorable stories to the world.”

Latos’ friend Petros Georgiadis wrote the screenplay for the film. According to Aharoni, Georgiadis has also written two other notable films, Sever and Running Out. Aharoni said that Georgiadis “is an extremely talented screenwriter who writes out-of-the-box and [writes] creative [and] dramatic films.”

The project was originally just Aharoni’s senior thesis film at Hofstra University, where Aharoni is in the Honors College and is studying film and television. However, the project grew to be more than just a school assignment. Aharoni said, “The project has gotten far larger than a typical school project. We have casted a two-time BAFTA [British Academy of Film and Television Arts] nominated actress, along with other very acclaimed actors and actresses.”

The film was shot in Astoria, Queens. Aharoni said, “It was a one-week shoot, all overnight. We started from 3 p.m. in the afternoon and went to 6 a.m. in the morning. We filmed all over Astoria. We had police escorts when we used a process trailer to film our driving sequences. We also shut down a few streets. It was a pretty huge project.” He added, “The school project has turned into an official SAG [Screen Actors Guild] and Union film. Bardo will be sent to various prestigious film festivals once it is completed—early [to] mid-next year. The film will be set for release in 2016.” He continued, “Dennis and I have two more films planned for next year….Our next two films will be released late 2016 and early 2017.”

Aharoni shared a synopsis of the film.

“Johnny, played by John Solo, pulls over at the end of his shift as a New York City taxi driver. He’s just dropped off his last costumer, who he stiffs of their correct change, and sits alone in his taxi. Suddenly, it’s quiet, he’s alone and the reality of his miserable life starts to surface. It’s obvious in his face and the look in his eyes that he is depressed, on edge and seeking an escape—an escape he hopes to achieve by his dependency on drugs and alcohol. That night’s drug purchase doesn’t go as planned as he finds himself at the mercy of his dealer, Marco, played by Alexandros Rouvas, who subsequently forces him into collateral for unpaid dues.

“Johnny’s inner demons as well as his father’s financial dependency on him overwhelms him. He’s back in his taxi and about to act on negative impulses. Suddenly, he’s interrupted by a hard knock on the driver’s side window. Lily, played by Lelia Goldoni, stands outside in the 30-degree weather insisting on a ride home. Barely rolling down his window and after some persuasion, Johnny reluctantly agrees to drive her, for a price.

“What follows is an unexpected ride from Astoria, Queens, into Manhattan that will test both Johnny’s patience and morals. As the ride goes on, surface layers will reveal something deeper between Johnny and Lily. Police sirens will go off, tempers will flare, all resulting in a very interesting evening.”

Aharoni said, “After taking Mr. Gluck’s filmmaking course back at Great Neck South [Middle School] in the seventh grade, my love for filmmaking began. After receiving our first storyboard assignment, in which we had to shoot what the storyboard had shown, I took the storyboard and immediately rejected it and went off on my own vision. Mr. Gluck saw my initiative and later told me I had something special,” he continued, “I began to pursue and work on my directorial vision for filmmaking. And from there, the rest was history.” 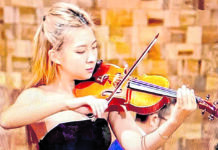 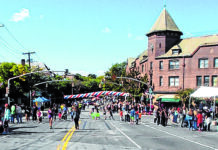