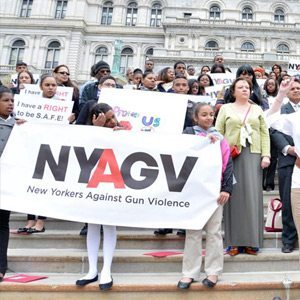 Assemblywoman Michelle Schimel, the co-vhair of State Legislators Against Illegal Guns (SLAIG), said, “We must always remind the public that despite New York State’s laws to curb gun violence including NY SAFE, innocent victims continue to be murdered on the streets and in their homes by illegal guns.”

The students, holding signs that proclaimed, “I Have a Right to be S.A.F.E.,” thanked Governor Cuomo and the bipartisan state legislature for passing the NY SAFE Act last year but said more needs to be done to keep them safe.

Leah Gunn Barrett, executive director of NYAGV, said, “It’s sad that these young people have had to experience gun violence in their neighborhoods where they have a right to feel safe. They are taking their experiences and what they have learned from our reACTION program and turning them into powerful advocacy to make their communities safer places to live. The NY SAFE Act was a positive step forward, but there is still more to we can do to protect our citizens, especially our children, from gun violence.”

The students and other gun safety advocates called on New York legislators to continue the state’s role as a national model for gun violence prevention. Specifically, they called for a Child Access Prevention Law, Nicholas’s Law, named for 12-year-old Nicholas Naumkin of Saratoga Springs who was shot and killed in December 2010 while on a playdate.

The group also called for microstamping, which would require all semiautomatic handguns sold or delivered in New York to be equipped with a feature that imprints a unique code onto the shell casing every time a gun is fired, is another piece of common sense legislation supported by the students and advocates.

Schimel, lead sponsor of the microstamping bill, said, “Microstamping would assist law enforcement in solving crimes and deter straw purchases and gun trafficking. I will continue to join the moderate voices to enact these regulations help stop these killings.”

New Yorkers Against Gun Violence is a statewide advocacy group working to reduce gun violence through advocacy and education designed to encourage action, influence public opinion and lead to policy change. With a primary focus on New York State, the organization also advocates at the local and national levels for sensible laws, policies and practices that protect New York State residents from gun violence. www.nyagv.org

State Legislators Against Illegal Guns was established in 2010 to support common-sense state legislation that keeps guns out of the hands of criminals, including background checks for purchasers, efforts to prevent straw sales, and better coordination and technology to trace and detect illegal gun sales.