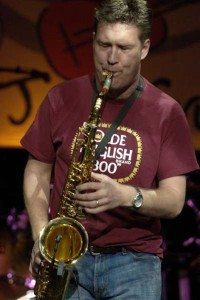 The Village of Great Neck Plaza presents ‘Shilts’ Weimar on Tuesday, June 24 at 8 p.m., at Firefighters’ Park.
“We are very fortunate to have Shilts appearing again for a rare East Coast performance,” said Mayor Jean Celender. “Shilts has performed all over the world, and his musicality, original sound and great songs are why he’s always on the top of the jazz charts.”
Weimar, hailing from London, England, has been performing professionally since the age of 16, backing up some of the music industry’s biggest acts, including The Temptations, Four Tops, and the Drifters.
For over a decade, Shilts was the front man of the British urban jazz funk group, Down to the Bone (DTTB), which enjoyed massive success in the U.S. Shilts composed and played saxophone on a majority of the songs that appeared on DTTB’s seven studio albums.
Focusing on his solo career for the past six years, Shilts has produced five albums, each one earning high praise. He continues to make hits with a upbeat, funky urban jazz sound that also makes him a leading session musician for artists such as David Bowie, Jimmy Paige and Bill Wyman.
In case of rain, the concert performance will be moved to the Great Neck Social Center (80 Grace Avenue). Concert-goers can check with village staff at the Village Hall on the day of the concert; call voicemail after 5 p.m. at 516 482–4500, or visit www.greatneckplaza.net, for an announcement.