Do you know about this century-old lighthouse on the North Shore? Built in 1876 to guide ships through the treacherous shoal, Stepping Stones Lighthouse is a Victorian-style structure situated on the Long Island Sound that continues to serve its navigational purpose in aiding ships away from collision with the myriad rocks that dot the sound.

Just 1,600 yards from Kings Point, the lighthouse sits on a formation known as the “Stepping Stones,” which is the namesake of the structure. Originally referred to as “Devil’s Stepping Stones,” the name was derived from a Native myth about a devil tossing rocks into the Sound in an effort to escape Connecticut tribes.

Last updated to modern standards in 1944, the lighthouse has sadly fallen into disrepair. If the structure deteriorates further, the lighthouse could be replaced by a navigational beacon, which would continue to serve as a guiding tool for mariners, but would lack the rich history that the current lighthouse provides.

The Great Neck Historical Society has been raising awareness on the importance of preserving this historical legacy. Restoring Stepping Stones Lighthouse to its former glory would cost approximately $4 million. As of now, a significant portion of the funds are still needed.

To help raise some of the much-needed capital, the Great Neck Historical Society, in conjunction with the Great Neck Park District and the Town of North Hempstead, will hold the annual 5K Run/Walk to Save Stepping Stones Lighthouse on Sunday, Oct. 14.

Restoring the lighthouse is not only a matter of retaining a historical structure, but is a step toward preserving the rich past of the Great Neck peninsula. The community has lost so many links to the past; it would be a shame if this reminder of times gone by were replaced by a modern tower. To continue to distinguish Great Neck from a typical bedroom suburb, it is necessary for centuries of historical context to be cherished by its current residents and maintained for future generations to appreciate.

In 2016, the town received a $165,000 National Park Service grant to rehabilitate the lighthouse. The grant has allowed the town to begin to address some of the major structural projects that need to be completed as soon as possible. One of the most pressing projects is gaining safe access to the lighthouse, which currently can only be accessed during high tide and low winds. The funding will be used to build a floating dock, ramp, boneyard and construction staging area so that other restoration projects can begin. Work will commence this fall.

It is our obligation, as residents of the community, to share in the task of preserving the history that the previous Great Neck residents built. 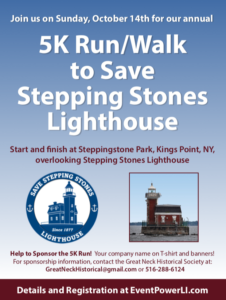 Help raise the necessary funds to restore Stepping Stones Lighthouse by signing up for the race, which will start and end in Steppingstone Park, winding its way through the streets of Great Neck. Register for $25 at www.eventpowerli.com before Oct. 12 at 5 p.m. and receive a T-shirt. After this date and on the day of the run, the entry fee is $30. Check-in and registration will begin at 7 a.m.; the race will begin at 9 a.m. All proceeds will go to the restoration. An awards ceremony will follow the run.

Learn more about the lighthouse at www.greatneckhistorical.org.