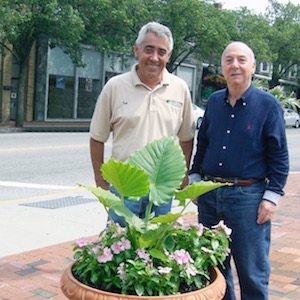 There’s no question in the mind of Great Neckers that the summertime is the best time of year.

From the many events that take place throughout the summer months—promenade nights, summer concerts, sidewalk sales, restaurant week or just walking down Middle Neck Road with the leafy green canopies from the trees above providing a nice breeze, the warm and welcoming atmosphere is one that makes folks wonder why Old Man Winter has to ruin everything come the end of the year. In addition to these wonderful events, plaza residents and visitors alike also know that come summertime, vibrant and decorative flowers adorning street planters and hanging pots will be dotting the village’s downtown business area and train station. And, while these flowers make their debut during the summer months, the decision as to what flowers will be planted is one that is strategically made between village officials and the village’s plant nursery suppliers and Santelli & Sons, months in advance.

The village places an emphasis on the continued beautification of the community. Inspired by the work of past Plaza mayors and lessons learned from visiting cities around the world known for their intricate floral designs, the village board decided to make unique floral combinations in our planters a main part of the beautification program. Mayor Jean Celender tasked trustee Gerry Schneiderman with choosing flowers that would not only beautifully decorate the village’s numerous planters, but wouldn’t require a lot of maintenance. After previously containing Alberta Spruces, trustee Schneiderman knew he wanted to go with a species of plant that would add color and zest to the village’s streetscape. After conferring with several nurseries and viewing many options, trustee Schneiderman, wanting to support a local business, chose Santelli & Son, the family-run Great Neck nursery with decades of experience in the field, as the village’s nursery. Together with Ryan Santelli, Schneiderman settled on a colorful combination of begonia, potato vine and scaevola for the village’s planters.

Fast forward to 2015, after years of using the combination of begonias, potato vines and scaevolas, trustee Schneiderman decided it was time to add variety to the village’s stock of planters. Once more, Santelli & Son came up with ideas for a new design to add to the village’s already colorful inventory of flowers. Working with Vic and Val Santelli, the village decided on two new planter designs; elephant ears and pink vincas for one set of planters, and cat palms, with pink angelonias, in another set of planters. So far, the new designs, which can found throughout the village, are earning praise. Rorie Wach Miller, owner of the Great Neck Diner, which has two planters containing elephant ears and vincas in front of the diner, has said the new planters are very attractive.

“The new planters are unique and beautiful, and definitely contribute to the summery atmosphere by dazzling Grace Avenue and Bond Street with a pop of color and pizazz,” said Miller.

The village has also heard favorite comments from numerous residents and merchants regarding the new planters. However, the village wants to hear from you as to what you think of our newest additions. Do you like the new planter combinations? Do you think the village should continue to modify the designs with new plant species throughout the village? Please call Village Hall, 516-482-4500, or email the village at info@greatneckplaza.net, and let us know your thoughts and comments on the village’s planters.