Jonathan L. Ielpi Firefighters Park on Grace Avenue was a sea of bright yellow T-shirts, worn by children and adults of all ages, in the early morning on Sunday, Oct. 7. There was a buzz of excitement, unity and purpose for the Safe Streets 5K and Fun Run, dedicated to the memory of Oren Bennaeim who was killed by a hit-and-run driver on Middle Neck Road two year ago.

The event was organized by Oren’s devoted wife, Jivanna, along with a corps of friends, neighbors and volunteers. North Shore Action, a local social-action group, also helped plan the run/walk, and many sponsors and local businesses lent their support. The event emphasized that we all need to do our part to walk and drive safely in the streets of our town. Stepped up law enforcement is needed. Too many precious lives have been cut short by careless and distracted drivers.

By 8 a.m., approximately 150 runners and supporters were registered. Many hours of planning went into the execution of the event, from promotion, registration and coordination with the police as well as county and village government. From the meticulously planned 5K course to the music, the remarks by community leaders, the refreshments and the closing award ceremony, the day was a meaningful and well planned from every angle.

As a volunteer for North Shore Action, it was gratifying to see so many families from all different parts of our community unite for the same cause. The desire for safer streets is a uniquely nonpartisan and nondenominational issue. 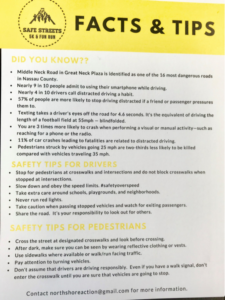 “Thank you from the bottom of my heart,” she began. “I feel like the most amazing people have come forward to make this day happen and that has been the best part of putting this together—getting to know all of you for the first time or even better than before. Feeling a part of a community while going through such a big loss has been the silver lining through it all. Sadly, many of you did not know Oren, my husband. He would have been so deeply touched that all these amazing women are coming together in his honor with the hope of making our community safer. I have no doubt he will be looking down on all of us. I know together we are creating a memorable day of what happens when a community comes together.”

The 5K course started on Grace Avenue and finished inside the park. Each participant who crossed the finish line was celebrated and photographed. The runners and walkers ranged in age from 5 to 85. The official first-place award went to Seth Kurpeil. Included in the top five were three girls from the Great Neck North High School Cross Country team: Alexis Namdar, Netta Mualem and Eden Reznik.

As participants crossed the finish line, each was handed a pledge card by a volunteer. The pledge card, which was written by Beth Friedmann and designed by Joanna Eshaghoff, included important safety tips.

The event would not have been possible without the efforts of local police and government, including Mayor Jean Celender who ran the course herself. A number of elected officials were present during the closing ceremony, including Nassau County Executive Laura Curran, Legislator Ellen Birnbaum, Assemblyman Anthony D’Urso, Town of North Hempstead Supervisor Judi Bosworth, Councilwoman Anna Kaplan and Town Clerk Wayne Wink.

A host of sponsors donated funds to defray the costs; others donated healthy snacks and water. Planet Fitness set up a tent in the park, where they provided hundreds of bagels, cream cheese and refreshments, as well as giveaway bags. Planet Fitness Club Manager Bryan Garcia and trainers Klarissa and Carlos were on hand to interact with participants and their families.

The need for safer streets was made evident in real time during the event, according to Beth Friedmann of North Shore Action who ran the course. On Middle Neck Road and Grace Avenue by the clock, lines of impatient drivers honked their horns. Even with police cars present, Friedmann saw distracted drivers with cell phones in their hands. As she ran the course on Baker Hill Road, she saw drivers try to go around a police barricade.

“It was unbelievable to see it right before my eyes during the Safe Streets event,” said Friedmann. “Drivers are distracted and many feel entitled to break the rules. Jaywalkers cross right in the middle of the street. We need crosswalks with a four-way stop to give pedestrians time to cross the busy road. We need No Turn on Red signs at more intersections.”

Mervyn Trappler, owner of the new and popular Rothchilds Coffee & Kitchen on Middle Neck Road said that he has seen a number of accidents, even when pedestrians try to use the crosswalk. In his view, more enforcement by the police is needed.

“I see illegal U-turns, drivers running red lights and drivers on their cell phones,” said Trappler. “I have attended public meetings, and I am concerned about the safety of Middle Neck Road.”

As a resident and business owner in Great Neck, Trappler has a unique bird’s-eye view of what goes on in the shopping district on a daily basis. For this reason, he supported the Safe Streets event as a volunteer. He has conveyed his concerns about safety and enforcement to community leaders, including Curran, who spoke to him at length on the day of the event. Trappler was invited to follow up with another meeting with Curran.

Read facts and tips for making our streets safer and to take the pledge to be safe.

Find out about the 8-year-old who came in third here.