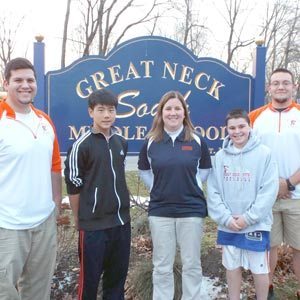 Don’t be misled by the fact that the Great Neck South Middle School football team won just one of its four games this season. The coaches and the players all agree that it was one of their most successful seasons in many years.

“It wasn’t about wins and losses,” said Joe Gianotti, who along with Mike Dimitriou, shared head coaching responsibilities in their first year with the Rebels. “It was about setting a good foundation of discipline, hard work and getting the players to learn the fundamentals of football. Maybe it wasn’t about getting wins this season, but getting wins in the next season and in the 9th and 10th grades. This group paved the way in an incredible way and we’re looking forward to getting better each and every year.”

Shawn Kang, an eighth grader who was selected by Gianotti and Dimitriou as the team’s most valuable player, also expressed satisfaction about the season. “Last year I was really expecting a good team but we didn’t have enough players,” he said. “This year was a lot different.”

Last season the Rebels scored just two touchdowns. This past season the team scored 16 touchdowns and in two of their three losses they were in position to win near the end of each game.

Cathleen Dnyprowsky, now in her 3rd year as the school’s athletic director, also agreed with her coaches and players. “We were looking for new faces that could come in and revitalize the program that had been struggling,” she said, in reference to her hiring of Gianotti and Dimitriou. “And they did revitalize it.”

“They came in and they were very positive and we felt that they would have a good rapport with the students,” she explained. “That has been obvious because the kids hound me every day when they’ll be back around the school, now that the season is over. They even worked with the high school coaches during the pre-season so they could learn what they should be teaching our students.”

Both coaches work in the district as substitute teachers and were offensive linemen in high school and college. Gianotti played for Sewanhaka and C. W. Post and Dimitriou played for Floral Park and East Stroudsburg in Pennsylvania. The one victory came in the final game, 42-8, against Friends Academy. The Rebels lost to Great Neck North Middle in their first game, 28-26, and lost 49-14 to Westbury in their second game. They trailed Thompson Middle (Syosset) by a touchdown and had the ball with five minutes left, but lost the ball on a fumble in their third game.

The team even found some measure of satisfaction in the Westbury loss. “They were ahead of us 35-0 in the first half but we played them evenly, 14-14, in the second half,” Gianotti said.

“It was fun,” said eighth grade center Matthew Solomon, another key player. “This season taught me a lot about life lessons in teamwork and about how not to give up. This year was special because we had great team chemistry.”

The coaches were enthusiastic about the play of both Kang and Solomon as keys to the team’s positive atmosphere. “Shawn did everything that we asked him to do,” said Gianotti. “We had a new system. We asked him to play many different positions. He was a utility guy. On offense he played wing, he played fullback, running back and receiver.

Defensively, he played linebacker, he played safety, he scored a few touchdowns, he made great blocks and he was the leading tackler on the team. He did everything you could ask for in a football player.”

“The players all agreed about our selection of Shawn as MVP,” said Dimitriou. “Matt was awesome, too. Even when he was hurt he showed up at practice and did everything he could possibly do. Even though he wasn’t always feeling 100%, he would always give 100%.”

Gianotti and Dimitriou will lose about half of their 30 players to graduation and Kang and Solomon hope to play on the junior varsity for South High next season. “But we’re going to be extremely competitive next year,” said Dimitriou of his returning 7th graders.