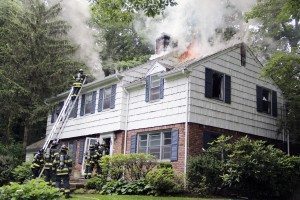 At 7:08 a.m. on Tuesday, June 16, all five Manhasset-Lakeville Fire Department Companies and the ambulance unit were dispatched for a reported house fire on Clent Road in the Village of Russell Gardens. Manhasset-Lakeville Fire District Assistant Supervisor Scott Chen was the first unit to arrive on scene and advised dispatch that he had smoke showing. Shortly there­after he transmitted a “Signal 10” for a working house fire.

Engine 8735 and Ladder 8743 arrived on scene together within minutes. The crew from Engine 8735 stretched a 1¾-inch diameter hose line, while the crew from Ladder 8743 performed searches and laddered the house. The main body of fire was located in the attic and was knocked down within 15 minutes. A second 1¾-inch diameter hose line was stretched off Engine 8735 and extinguished hot spots on the second floor of the house.

The Nassau County Fire Marshal’s office was notified and is currently investigating the cause of the fire. All units were released from the scene by Chief of Department Scott Garrigan by 9 a.m.