The Rotary Club of Great Neck’s summer community band will dedicate the season’s third concert on Wednesday, July 20, in memory of clarinetist Beatrice Aubrey, who passed away at age 86 on June 2, the very day rehearsals began for the new season.

“Joining the Rotary Band was the culmination of a lifelong musical journey,” according to her son David, who will say a few words about his mom at the concert. 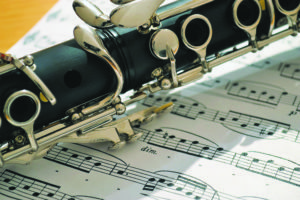 Aubrey grew up around music. Her father was a violinist and she played piano from a very young age, continuing her music studies at Brandeis University. In addition to playing piano, she was also a singer and sang in the world’s first English-language production of Three Penny Opera. A lifetime of singing followed, with 40 years at the celebrated Dessoff Choirs.

In the community, she sang in the alto section of the Temple Isaiah choir and was a member of the Great Neck Choral Society. She also gave private piano lessons to many students in town.

Involved mostly with piano and voice, Aubrey picked up the clarinet in the late ’90s when Maestro Michael Flamhaft, conductor emeritus of the summer band, announced the formation of a New Horizons Band for seniors who hadn’t played since high school—or ever.

“She responded to an ad she saw at age 70 for a group called the New Horizon Band, sponsored by the Association of American Musical Instrument Manufacturers, which was aimed at the senior population,” said Flamhaft. “The band lasted for two years, but it couldn’t compete with all of the other activities in Great Neck. People were involved in so many other things. So, those members joined the Rotary Club Band,” continued Flamhaft, who founded the group, known as RCB, in 2001 and conducted it until last year.

Aubrey was a member of the summer band’s clarinet section for nine years, taking a leave of absence when her health prevented her from continuing. “In season, we were together for eight rehearsals and four performances,” said Flamhaft. “When a question arose about the history of a particular piece of music, she was often the first one to come up with the answer. She was very knowledgeable.”

Now in its 16th year and, for the first season, under the direction of Anthony Bavota, Chaminade’s band director, RCB will perform “Aye Clarumba,” written and conducted by Flamhaft, at the concert to showcase the clarinet section.

“Beatrice was an incredibly pleasant, sweet, dedicated person who played in the third clarinet section of the Rotary Band,” said Flamhaft. “She stopped about two years ago because of illness. They thought she would be returning this year, but unfortunately, it didn’t happen. She died on the day of our first rehearsal for this season. She is sincerely missed by the people she played with.”

The performance will begin at 7:30 p.m. and is the third of four free Wednesday night concerts this July at the Old Village Green, cosponsored by the Great Neck Park District. In the event of inclement weather, the show will be moved to the ice rink at the Parkwood Sports Complex at 65 Arrandale Ave. Regardless of the location, concertgoers must bring their own chairs.