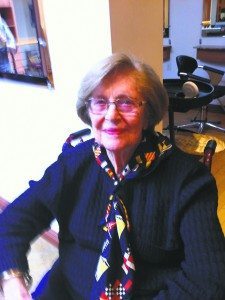 Rosalie “Mickey” Greenberg, who was very much a part of the Great Neck history from 1946 until 1997, died on Oct. 14. She was born on Nov. 27, 1917, and would have been 98 next month. She grew up in Floral Park, where her family members were community leaders. They were founders of the temple and involved in the local public library and the school hot lunch program. She was in the first graduating class of the then new Sewanhaka High School, and was a leader at Adelphi College which had recently moved to Garden City from Brooklyn.

During WWII, she was the Volunteer Coordinator for the Nassau County Red Cross Disaster Relief while she was only in her 20s. In 1997, she moved back to Floral Park to North Shore Towers, on the hill where she and her fellow Girl Scouts used to hike for picnics and make s’mores. She and her husband, Herbert Greenberg, raised their four children (Woody, Betsy, Amy and Susan) in Russell Gardens where they lived for 54 years before moving to North Shore Towers, near Long Island Jewish Medical Center, where she was a founding member and longtime trustee.

The funeral was held on Oct. 18 at Temple Beth El.