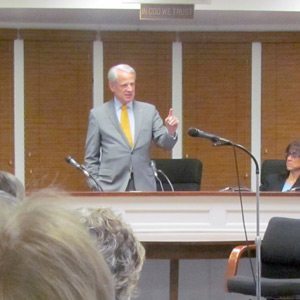 Speaking at the Village of Great Neck Village Hall, Israel, who represents the 800,000 people of the seventh district, said that wherever he goes, everyone asks why Congressional representatives can’t work together, why they can’t find common ground.

“We need to get away from blame and gridlock … and find solutions,” the Congressman answered, speaking of his colleagues in Congress and in the Senate. And in order to get the economy moving again, he stated that “we have to compromise.”

Israel emphasized that “There are jobs waiting to be filled … with the right investments in infrastructure.”

And Israel turned to big U.S. companies to help supply the funds, with “big, bold compromises.” These companies that “park their assets” offshore, could compromise and make a deal.

The compromise would include a tax-break for the repatriated companies; a considerable savings for a company in exchange for bringing their business back home and “helping to rebuild America.” They would be taxed only at capital gains rates.

Israel said that currently there are $2 trillion in offshore assets. And it is his belief that these offshore companies would be happy to come home, to enjoy the tax-breaks as they help boost the American economy.

A special bank, an investment authority, would be set up to handle such deals. The idea would be that the bank would have public over-sight; it would be run by a citizens board. This would help ensure “transparency” in all operations.

Israel explained that such an incentive would be a by-choice program, with companies choosing to join.

Democrats and Republicans would have to agree to this program. Said Steve Israel: “Our constituents want us to figure it out … I think it’s worth the fight.”