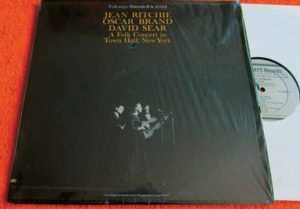 I was very sorry to hear about the recent passing of old friend and colleague Oscar Brand. I met Oscar almost 70 years ago when, as a young teenager, I became the banjo player in the folk band that played on his radio show Folk Song Festival for several years. The program aired weekly on WNYC, then owned by the City of New York, and became the longest-running radio show in history.

Opening the show, I played a hot lick intro on the banjo with Oscar singing “New York Girls Won’t You Come Out Tonight,” words he made up to “Buffalo Girls”—and the program was off and running. I often think that Oscar set the stage for the Prairie Home Companion, which Garrison Keillor expanded into his program.

Following the opening, Oscar would sing a song for which I would sometimes sing or play along and then he would present his resident female singer, the most distinguished of which was Jean Ritchie. We all loved Jean, and the Brand-Ritchie family became friends for life.

After Jean, the band would play some square-dance tunes and, if I was very lucky, Oscar would have me sing a song. Next, Oscar would introduce the guest for the show, and therein came the world of folk singers—and what an experience for a teenager traveling that road. The guests included Woody Guthrie, Pete Seeger, The Weavers, Harry Belafonte, The Duke of Iron [Cecil Anderson], Lead Belly [Huddie William Ledbetter], Sonny Terry, Brownie McGhee, Bob Dylan, Judy Collins, Phil Ochs and Tom Paxton, many of whom I subsequently worked with and became guests on my radio program.

In the years to come, WNYC opened its Saturday night lineup with Prairie Home Companion, followed by Oscar’s Folk Song Festival, followed by my program Folk Music Almanac, which aired for almost 50 years. That was the lineup, and folk-music enthusiasts would stay home on Saturday nights to listen. Oscar provided me with a wonderful training ground to develop my skills. He offered thoughtful advice, and came to my wedding. 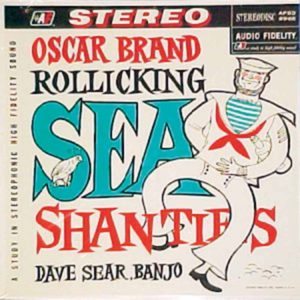 In the years that followed, I made records with Oscar for Electra, Folkways, Tradition and Audio Fidelity. Of all the work I have done, I am probably best known for the bawdy ballads we recorded for Audio Fidelity, and my favorite album is the Bawdy Sea Songs. These sold in the thousands all over the world, and when someone comes up to me and says, “I have your record,” 9 times out of 10 it will be the bawdy songs. Most of the songs are Oscar’s rewrites of traditional songs, because he was a prolific writer of plays, shows, books, songs and much more.

The record that was the most fun was A Folk Concert in Town Hall that I did with him and Jean Ritchie at Town Hall in New York City. Jean became my lifelong friend, too. The record was released by Folkways and is still available through the Smithsonian, which preserves the Folkways archive, as well as Oscar Brand’s archive of radio programs and the rest of his considerable work.

I will miss him.

Great Neck resident Dave Sear has been an active member of the folk-music scene since the late 1940s and has performed all over the United States and in Europe.