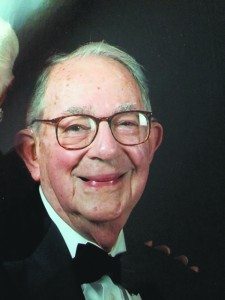 Howard Bauman, World War II veteran and longtime Great Neck resident, passed away on Tuesday morning, Sept. 29, at 95. He was, and remained up until his passing, very involved with the Troop 10 Great Neck Boy Scouts.

Once a Boy Scout himself, Howard became Scoutmaster in 1963 when his sons, Larry and Andy, also became Boy Scouts. He continued to be Scoutmaster for a number of years after his sons grew up and also served as a committee chairman, advisor and publicist for the troop.

Bauman was also very active in the Great Neck community, including being part of a committee for veterans and walking in the Veterans Day parade in Great Neck two years ago.

On being a veteran, Andy explained how his father was a staff sergeant in the army in WWII. Stationed in the Pacific in places like Guam and New Guinea, Bauman would help design air strips so that planes could land with necessary supplies.

It was when he was on leave in Sydney, Australia, that he met his future wife, Joy. “It’s a little bit of a love story,” said Andy, when describing how his parents met. After corresponding for two years through love letters, Joy left Australia and disembarked to San Francisco, where she and Howard married almost immediately.

“They settled in Great Neck in 1955, lived in the same house, were married for 68 years and the romance lasted over 70 years since they first met. They were inseparable,” Andy continued.

“We moved to Great Neck and we’ve been here ever since,” said Joy. They raised three children, Larry, Elizabeth and Andy, which is when Howard became reinvolved with Boy Scouts and devoted himself to Troop 10. In describing her late husband, Joy said, “He was a wonderful husband and father, artistic and humorous.”

Troop 10 is one of the oldest Boy Scout troops in the United States, founded in 1915 by the Theodore Roosevelt Council. Howard was honored in 2009, where Andy explained, “wonderful things were said about him.” The troop just recently celebrated their centennial anniversary on Sunday, Sept. 27, an event that Howard was able to attend and was also honored at just a couple of days before his passing.

According to Dr. Dwight Rosenstein, the current Scoutmaster of the troop, Howard “influenced a number of youths, many who became productive adults.” Among the speakers at the brunch were three such adults, successful men who credited Howard Bauman, their Scoutmaster from 50 years ago, with contributing greatly to where they are today. Dr. Robert Sadock, a prominent physician and teacher in the Yale School of Medicine; Bruce Lemkin, a former Deputy Under Secretary of Foreign Affairs in the U.S. Air Force; and David Gurfein, Lt. Colonel (Ret.) U.S. Marines who is currently running for Congress, all spoke about how Howard helped them to become more responsible, have the right ideals, accept challenges and become problem solvers.

“I am one among many who is grateful to have known him. He was a steady rock,” said Rosenstein. Bauman also received a standing ovation at the celebration for the positive impact he had on so many Scouts over the years, guiding countless youth and mentoring many men in the service of teaching leadership and service to others.