On the day before the Democratic National Convention in Philadelphia, thousands marched, calling for a transition from dangerous energy to clean, renewable power. The day was amazing, and it was thrilling to see what ordinary people will do when they’re inspired for a cause. And, Reach Out America, a progressive grassroots nonprofit organization based in Great Neck, was there.

The March for a Clean Energy Revolution was endorsed by 900 organizations from all 50 states and was sponsored by Food and Water Watch. Participants marched down Market Street with colorful banners and thousands of signs, and were clearly seen and heard as the march was covered by dozens of media outlets, from national television stations to local newspapers. 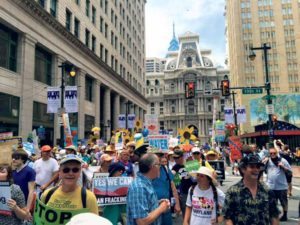 The marchers can’t declare victory—they have only just begun. But, Reach Out America will continue to work to help build the clean energy movement by convincing local and national officials to take real action to eliminate our reliance on fossil fuel. 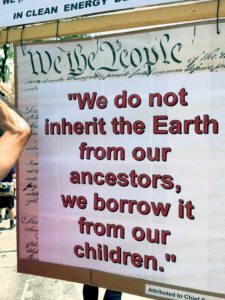 Reach Out America, whose mission is working for change, meets on the second Wednesday of every month at 12:30 p.m., except during July and August, at the Unitarian Universalist Congregation at Shelter Rock.