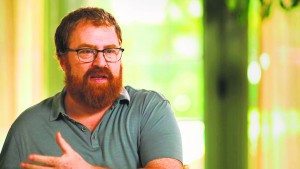 The Fifth Annual Gold Coast International Film Festival (GCIFF) is celebrating the work of Great Neck native Academy Award-nominated and Emmy Award-winning filmmaker R.J. Cutler. GCIFF is presenting a retrospective of his acclaimed films, culminating in a special screening of his latest film, Listen to Me Marlon, at the film festival.

The retrospective moved to Port Washington on Oct. 22 for a screening of The War Room, a political documentary featuring George Stephanopolous and James Carville, which provided Cutler with an Oscar nomination.

The final screening at the Port Washington Library on Nov. 13 will highlight Cutler’s fictional directorial debut, If I Stay starring Chloë Grace Moretz.

On Saturday, Nov. 14, at 3:30 p.m., audiences will be able to enjoy Cutler’s latest documentary, Listen to Me Marlon, which examines the life of icon Marlon Brando. The film was completely constructed using archival footage, as well secret audiotapes that Brando used to document his life. Listen To Me Marlon has received critical acclaim and will be featured at the festival in Manhasset’s Bow Tie Theater on Plandome Road.