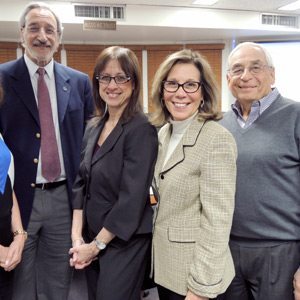 Great Neck’s Public Access Television has come a long way since it began 30 years ago.

Now, according to PATV Executive Director Shirley Bruno, 185 new programs will provide 6,000 hours of programming. Bruno gave an update on the stations at the April meeting of the Great Neck Village Officials Association.

For Bruno, PATV’s objective is to deliver community-based programming—often produced by community members themselves—that does not resemble the content produced by commercial broadcast and cable networks.

“My goal is to provide a wide variety of programming you can’t see anywhere else,” Bruno said.

Last year’s PATV open house was a wonderful way to show off the new studios at 1111 Marcus Avenue in Lake Success. A series of training workshops that began in April made for a great start to the new year and laid the groundwork for successful shows.

With a great deal of pride, and much excitement, she showed several short clips of new programs to the audience of public officials at the meeting.

Bruno said that much has changed over the years. At the beginning, each village would have to post its own information, its own events on its own website or newsletter.

Today, with new technology, each village is able to easily post online through PATV. Villages will also have the opportunity to cablecast live, and, as well they can tape programs and events.

In the end, Bruno emphasized, the goal is to get people to do their own programming. This can be done on-site and Bruno encourages residents to get training and the use of the equipment.