The Village of Great Neck trustees said they will make changes to their initial rezoning legislation, after much community pushback.

The mayor used the March 5 board meeting for community “input,” implying that the amendments to the proposed rezoning legislation have not been drafted yet and will be influenced by the comments made during Tuesday’s meeting.

The current proposed legislation would give the village the ability to grant developers limited relief from current zoning restrictions, upon subsequent approval.

Relief from some of the existing restrictions within the two business corridors would be granted on a case-by-case basis, after analysis of whether the proposed projects would bring a “community benefit,” according to VHB, the consulting firm commissioned by the village to conduct a study of the corridors and propose zoning amendments.

Though the meaning of “community benefit” may be subjective, the proposed changes to the zoning code specifically incentivize the construction of buildings with ground floor commercial uses, privately owned assisted living facilities and affordable housing.

The proposed amendment to the zoning code also gives the village board the ability to relieve current zoning restrictions and grant construction of as many as four stories for ground floor commercial buildings and as many as five stories for assisted-living facilities.

The legislation, limited specifically to the East Shore and Middle Neck road corridors, comes at a time when many storefronts sit empty in both business areas.

“We have so many empty stores already in Great Neck,” said Yaffa Rabe, who is against the proposed legislation. “Everything is run down, and people don’t feel like they need to come and shop here.”

The amendment to the zoning code is the first step in a “revitalization” plan, meant to stimulate business in the village by encouraging development.

Despite overall acknowledgment of the problem of vacant storefronts, opponents to the potential rezoning cite the overcrowding of schools, increased traffic and faulty VHB environmental and traffic studies as reasons to not move forward with the proposed code.

Though the mayor said that he and the trustees will “significantly amend the proposed local law,” he did not lead off with, or mention at any time, what specific changes he, or any of the village trustees, were thinking about making.

Instead he looked to the public for “recommendations and suggestions” on how to improve the proposed amendment to the zoning code.

Most village residents, however, came prepared to raise concerns about the legislation as a whole.

“We’re concerned about the excess density in the residential population in our district,” James Wu, a Village of Great Neck resident, said. “Potentially, this proposal will add as many as 3,000 residents to a village of 10,000 people. That’s almost a 33 percent increase”

Wu also pointed out how the rezoning proposal relies on a traffic study that uses data from 2013, and only examines “a very limited proportion of the roadways as opposed to the entirety of Great Neck village. This is patently ridiculous,” Wu said. “[The VHB traffic study] ignores the existing traffic realities of our community. The DGEIS [Draft Generic Environmental Impact Statement] report also ignores many other important infrastructural issues.”

Instead of making changes to the current rezoning proposal, multiple residents suggested completely starting from scratch and throwing away the legislation.

“What would serve the village and the trustees, as a custodian of the village, is to really start over again,” said Kovid Saxena, a resident who also submitted to the trustees a 13-page document commenting on the flaws of the DGEIS and the proposed zoning amendments. 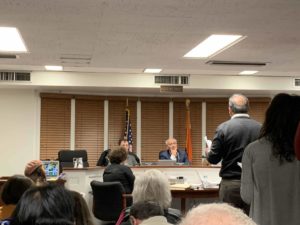 Saxena, and 15 other village residents who signed the document, called the proposed rezoning “an affront to the core values of this community.”

Chengbin Xu, a village resident, also believed an entirely new legislation should be drafted, instead of simply changing the existing proposal.

“I don’t want to revise the plan; I just want to chop the plan totally,” said Xu.

But the mayor said he plans on amending instead of starting over. He also assured that there is no immediate rush to pass the legislation.

“We are going to continue listening,” Bral said. “Amendment doesn’t mean that you can just amend and pass it. You have to amend it, post it, have public hearing on it and after that you can pass it. The same process that we went through with this one we have to go with the amended legislation.” 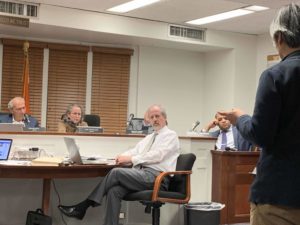 For now, the village residents, and residents of Great Neck, will be waiting to see what specific changes to the proposal will be made.

“I am going to work with the other mayors around our village, with Barbara [Berkowitz] from the Board of Education, with Vigilant [Fire Department], with Alert [Fire Department. We’re going to continue discussing this,” Bral said.

Though the next meeting will be held on Tuesday, March 19, it is unlikely that changes will be made by the next meeting, according to village attorney Peter Bee. This is due to requirements on how many days in advance trustees must receive amendments to proposed legislation before amendments can be posted.

Regarding when legislation would finally be voted on, Bral said, “I don’t know. We have to see how long it goes.”