On June 26, I attended a hearing at Great Neck South Middle School, held by the NYS Department of Environmental Conservation (NYSDEC) regarding a Superfund site near my home. For years, the Sperry Company used toxic chemicals in their manufacturing operations on a large site at the intersection of Lakeville Road and Marcus Blvd.  The chemicals have seeped into the ground and infected the water table.  The pollution has been labeled “the Plume” because it is expanding, mostly north and west.  According to the map, it seems to be under my street, and is slowly commuting to Queens. 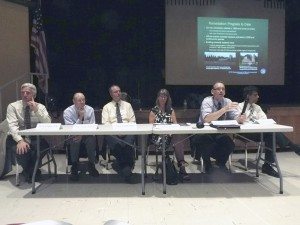 I want to know why the experts seem determined to pursue remedy #2.  I realize that they may never be able to restore the site in question to its pre-polluted state, but don’t you think they  should give it their  best shot, and try?

To that end, I wrote to Girish Desai, NYSDEC Project Manager, asking him to please explain why solution #2 is better than solution #5.  I received a response stating that I will be alerted when the NYSDEC makes its final decision.  Comments are being accepted through July 14 at gvdesai@gw.dec.state.ny.us.  I encourage you to write immediately to express your opinion on this matter.  You can also sign up to receive fact sheets from the NYSDEC at www.dec.state.ny.gov/chemical/61092.html.

We must pressure our officials to make the best decision for our environment and for the residents of Great Neck.