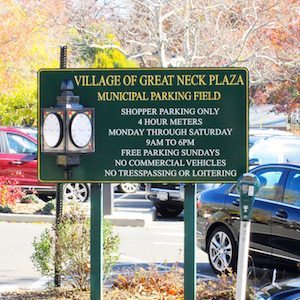 Motorists who park in Great Neck Plaza will soon have to pay closer attention
to meter rates and time limits as they exit their cars, now that the village has enacted a sweeping set of changes that will go into effect in the coming months.

A summary of the changes is at the end of this story.

Mayor Jean Celender and the board of trustees unanimously approved the changes to its parking regulations in the village code last week after a year of study and public discussions.

The most noticeable change, one that hasn’t been adjusted in over 20 years, will be to the meter rates (including the munimeters). The rate per hour will go from a quarter to 50 cents but, for the first time, drivers will be able to purchase time in 30-minute increments.

This means that parkers who feel that they’ll need less than 30 minutes to run their errands will still be able to pay just a quarter. The five-minute “grace period” that exists currently with meters will remain as is.

The Mayor did say that it would take some time before the changes could go into effect, citing the need to educate the public about them, reprogramming all the street meters and munimeters, changing signs and clearly designating which spaces are limited to two hours and which spaces will allow for four hours.

But one Plaza merchant present at the meeting for the public hearing, prior to the vote, wasn’t very pleased with the changes.

Mark Wolf, whose family business, Camp & Campus, has been a fixture, first on Bond Street and now on Middle Neck Road for almost 60 years, was adamant in his feelings that the changes would hurt business, not help it.

Wolf was the only merchant present at the meeting, except for Danny Arbusman, the owner of Jewels By Viggi, who was there on an unrelated matter.

In reading a three-page letter that he distributed to the board and the small audience in attendance, Wolf emphasized his skepticism that the changes would work to improve downtown and that the parking consultant that the village had hired to advise the trustees did not do a thorough enough study.

Wolf was particularly upset about the board’s decision to reconfigure the lot (Plaza Centre #4) behind his store, leaving just 20 of the 99 spaces with four-hour limits. The rest of spaces would be limited to two hours.

Wolf cited studies of the lot that he had done himself and observed many abuses of drivers who refused to avail themselves of readily available parking permits and instead chose to feed the meters because it was cheaper and more convenient.

He asked that the two-hour limit be increased to three, but the board did not take that suggestion. “The two-hour situation is inadequate,” Wolf said. “How does someone in this town have lunch and go to two stores or have their nails done in two hours?”

The Mayor answered him by citing the village consultant’s finding that the average time that people parked was less than 90 minutes. Wolf countered by saying, “He was here for two Thursdays for two or three or four hours at the max. Two Thursdays. He wasn’t here on weekends.”

Celender also said that better parking enforcement would result with less four hour meters in use as agents were presently limited logistically as to how many times a day they could monitor the abuse of those spaces.

But the board did pass a resolution to slightly increase the number of four-hour spaces in that lot after listening to Wolf’s arguments, but did not set the exact number, pending a reexamination of the lot.

At times, the conversation between Wolf and the Mayor and several of the trustees was heated, but Celender did try to assure him that his concerns would be considered.

“We’re going to look at this again and make sure it’s working,” said Celender, referring to the entire parking problem. “We’ll see if it’s working and it will be for more than two days, I promise. We’ll look at Sundays and see if these methods work and (if) they are improving the situation, and (if not), we’ll go forth with additional changes. We’ll look at whatever we have to do to improve it.”

The board hopes that raising the meter rates will result in more permits being purchased, thus freeing up spaces for shoppers. Two-hour street meter limits will remain.

Wolf, accompanied by wife, Gilda, who also spoke, was also upset that Sunday parking rules, when parking is free everywhere, were not being changed.

“Sunday’s a disaster,” Wolf stated to the board, claiming that he’s observed many holders of permits foregoing their use to park all day at spaces on Middle Neck and in the lot behind his store. He also cited others who take spaces away from shoppers on Sundays by parking for free to take the LIRR for a day in the city or to a Mets game.

The changes (as listed on www.greatneckplaza.net):

Listed below is a summary of changes that the Mayor and board of trustees of Great Neck Plaza approved at its meeting on Wednesday evening, Sept. 16 .

The fee for all parking meters (streets, lots and garages) will be 25 cents for each period of 30 minutes or fraction thereof.

Parking meters in both the Maple Drive and Plaza Centre Garages will continue to be in effect from 9 a.m. to 6 p.m., Monday through Friday, for a maximum of two hours (conformed so both garages have the same time limit).

The number of short-term meter spaces will be reduced from 22 spaces to 11 in the Plaza Centre Garage.

*The board has agreed to increase the number of four hour spaces in the lot but an exact number of the increase has not yet been determined.