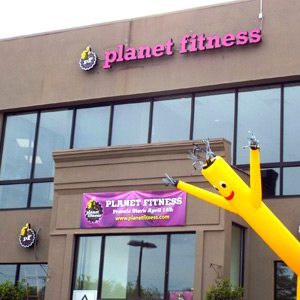 Despite its announced intention to celebrate its grand opening on June 4, and with everything seemingly in place, Planet Fitness ran into an unexpected delay caused by the Nassau County Fire Marshal’s request for a better basement egress.

Planet Fitness has not scheduled a new opening date as of press time for its facility in the basement below Waldbaums in the shopping mall on Great Neck Road. “We’re hopeful it’s going to be a week or two but we’ve got to work with the fire marshal’s schedule,” said Justin T. Vartanian, legal director of Planet Fitness, who was attending Great Neck Plaza’s Board of Trustees meeting last week to discuss details of the facility’s conditional use permit with the village.

The county has questioned the adequacy of the building’s egress in a back hallway. Vartanian stated that the landlord was working quickly to modify the hallway to the county’s satisfaction. “We’re waiting on final permits that the landlord needs to obtain,” he explained. “We’re ready to go.”

Vartanian appeared before the board to discuss Planet’s plan to offer use of “Beauty Angel” machines to its customers. Claims for the machine state that its infrared light, combined with several levels of vibration, stimulate muscles, rejuvenate skin and provide a relaxing massage while users stand in a small capsule for 12 minutes.

Mayor Jean Celender and Deputy Mayor Ted Rosen voiced serious concerns about the safety of the machines in a public discussion with Vartanian. The Mayor said that her research with dermatologists found that the so-called red light treatment was harmful to the skin. “If you have open wounds or sores it can have an effect on healing,” Celender commented.

Rosen was quite concerned about the fact that the machines were under the government’s Food and Drug Administration regulation as are tanning machines. Tanning machines using ultra violet rays are prohibited by the Plaza’s code. Vartanian countered that the “Beauty Angel” machines were in safe, widespread use by Planet Fitness and that they emitted no light that could be considered as ultra violet rays.

Mike Sweeney, the village’s commissioner of public services, recently visited the Hicksville branch and used the machine. Sweeney gave a detailed account of his use of the “Angel” to those at the meeting and said that there were apparently no ill effects or any tanning effect.

After a brief recess, the Mayor and the board gave the gym facility approval to use the machines but Rosen did state, as part of the motion to approve, that “If we get clarification from the FDA and if it turns out to be something other than what it appears to be, then we would have the right to call you back in to re-address the issue.”

Also on the agenda was a public hearing on a proposed amendment to the village code regarding the use of valet parking by businesses. But the hearing was adjourned until the July 2 meeting. “The board is still working on how this is (to be) drafted and considering (as to) how we want to treat this or modify this,” Celender explained.

The board did vote to grant a temporary permit to the Long Island Sephardic Center at 3 Grace Avenue, a learning center for Jewish studies, after receiving assurances that the group would number no more than 30 or so participants and that the premises would be used for classes and learning activities only.

The board also voted to extend its temporary moratorium prohibiting businesses that engage in smoking activities to the end of next May, indicating the need to evaluate ongoing national studies on the possible harmful effects of hookah lounges and e-cigarettes.

A request by Bare Bonez Fitness to add massage therapy services to its facility at 25 Cuttermill Rd. was also approved.