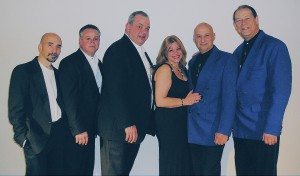 The Village of Great Neck Plaza has Piece of the Rock performing this Tuesday, June 30, at 8 p.m., at the gazebo in Firefighters’ Park. Playing the Plaza for their second year in a row, Piece of the Rock will pick up right where they left off, playing a variety,  from the hits of Elvis Presley to today’s hits, and everything in between. Stated Mayor Jean Celender: “Piece of the Rock’s music appeals to people of all ages. Whether they are singing some of the biggest hits from the 1950s or today’s chart toppers, concert-goers will no doubt be singing along to the music that has been a part of generations of families.”

Piece of the Rock is a six-member group featuring a dynamic singing trio and three superb musicians. Anthony Ventiera and Tom Scotti, the male singers, will sing familiar songs by Frank Sinatra, Elvis Presley and Rod Stewart. The female half of the duet, Cathy Santonello, does songs made popular by Michael Jackson, Celine Dion and some of music’s other top female singers from years past and today. Together Anthony and Cathy do songs from Sonny & Cher, Nat “King” and Natalie Cole, and even The Righteous Brothers routines. With their set list of yesterday’s hits and today’s chart toppers, Piece of the Rock will take you on a musical journey that will have every member of your family, young and old, singing along.

In case of inclement weather, the concert will be moved to the Great Neck Social Center (80 Grace Ave.). Check with village staff at Village Hall on the day of the concert or call voicemail after 5 p.m. at 516-482-4500. There will be a recorded message if the day’s scheduled concert has been moved. The village will also post an announcement on the village website, www.greatneckplaza.net, if the concert is moved indoors.