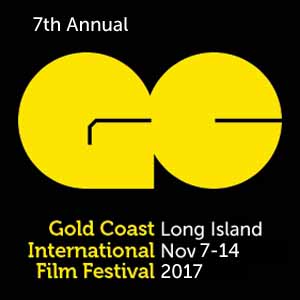 The seventh anniversary of the Gold Coast International Film Festival will bring more than 80 feature and short films—along with parties, filmmaker Q&As and glamour—to Long Island’s North Shore from Nov. 5 to 15.

This year’s award-winning selections will present diverse topics from highly acclaimed Jewish-themed films and important women’s issues to science, WWII and a Chinese comedy about a touching father-son relationship.

The work of talented school-age filmmakers from grades K to 12 will also be presented in the Young Filmmakers Program in partnership with Hofstra University.

The festival will celebrate its launch on Sunday, Nov. 5, with screenings of two inspiring films at the Bow Tie Squire Theater at 115 Middle Neck Rd. in Great Neck.

Underfire: The Untold Story of Pfc. Tony Vaccaro, the remarkable story of WWII infantryman and legendary photographer Tony Vaccaro, who created one of the most comprehensive, haunting and intimate photographic records of the war using a smuggled $47 camera while developing the negatives in his helmet at night, will be shown at 3:30 p.m. Vaccaro, Director Max Lewkowicz and Producer Valerie Thomas will participate in a post-screening Q&A, followed by the opening reception of Vaccaro’s acclaimed photography at the Gold Coast Arts Center Gallery at 113 Middle Neck Rd. in Great Neck.

Supergirl, the story of Naomi Kutin, an Orthodox Jewish preteen who holds a world record in powerlifting, will be shown at 3 p.m. The coming-of-age biography chronicles Kutin’s struggles with cyber bullying, adolescence and her religious obligations. The film’s director will join Kutin and her family for a Q&A following the movie.

One of the hottest tickets is for the local premiere of Dare to Be Different about the small Long Island radio station, WLIR 92.7, which helped launch the careers of U2, Talking Heads, Depeche Mode, Blondie, Duran Duran, Tears for Fears, The Clash and The Cure in the 1980s, on Sunday, Nov. 12, at 5 p.m. at Soundview Cinemas in Port Washington at 7 Soundview Market Place. Director Ellen Goldfarb, Executive Producer and former WLIR Program Director Denis McNamara and other special guests, including artists and DJs featured in the film, will participate in a Q&A.

The festival’s Spotlight Film, Darkest Hour starring Gary Oldman, whose brilliant performance as Sir Winston Churchill drives this historic account of the early days of World War II, will be screened on Monday, Nov. 13, at 7 p.m. at Soundview Cinemas in Port Washington. The film, which is receiving rave reviews for Oldman’s portrayal of Churchill as the British prime minister’s courage to lead changed the course of world history, will be followed by a Q&A with Churchill’s granddaughter, world-renowned sculptor Edwina Sandys.

Compiled from six hours of never-before-seen conversations with Israel’s founding father and former prime minister, Ben-Gurion: Epilogue will be shown on Wednesday, Nov. 8, at 7:30 p.m. at the Great Neck Squire Theater, followed by a Q&A with David Ben-Gurion’s grandson, Alon Ben-Gurion.

Bombshell: The Hedy Lamarr Story is the fascinating true account of the screen legend, an Austrian-Jewish émigré who many regard as the most beautiful woman ever to appear in films. At night, the actress was the inventor of a secret communication system that helped the Allied forces defeat the Nazis in World War II. The Long Island premiere of the film will be held on Thursday, Nov. 9, at 7:30 p.m., followed by a Q&A with an esteemed panel, including the film’s director, Alexandra Dean; Dr. Christine Metz, PhD, past president of Advancing Women in Science and Medicine and professor at the Feinstein Institute for Medical Research and at the Zucker School of Medicine at Hofstra/Northwell; and Fleming Meeks, former executive editor at Barron’s, whose extensive recorded interviews with Lamarr, conducted for a 1990 article in Forbes, served as the backbone of the award-winning documentary.

Bill Nye: Science Guy is an exclusive, behind-the-scenes film that follows the bow-tie-sporting Nye on his journey to make the world a better place through science advocacy and education on Saturday, Nov. 11, at 7:30 p.m. at Soundview Cinemas.

Also making its Long Island premiere on Saturday, Nov. 11, at 4 p.m. at Soundview Cinemas is Straight/Curve: Redefining Female Body Image, the documentary that examines the industries and obstacles responsible for the present body-image crisis and showcases the dynamic leaders fighting for more diversity of size, race and age. A Q&A with Director Jenny McQuaile, Oscar-winning Producer Yael Melamede and experts from Northwell Health will follow the screening.

Another Long Island premiere, King of Peking, a comedy-drama about a father and son in China who travel around as a mobile cinema projecting Hollywood films for local villagers, will be shown in Mandarin with English subtitles on Sunday, Nov. 12, at 1 p.m. at Great Neck Squire Cinema.

Fans of film and food will delight in the Long Island premiere of Hummus! The Movie on Sunday, Nov. 12, at 4 p.m. at the Great Neck Squire Theater, followed by The Great Gold Coast Hummus Taste-Off next door at the Gold Coast Arts Center. The event will include wine and bites from local favorites Grill Time, Lederman Caterers, LOLA, Mediterranean Seafood and Grill and The Inn at Great Neck.

Also on Sunday, Nov. 12, at 7 p.m. at the Great Neck Squire Cinema, the Long Island premiere of 1945 will be shown. This subtle and nuanced study of the collective guilt and enduring anti-Semitism of postwar Hungary is set in a remote village in August 1945, where two Orthodox Jews arrive at the local train station and rumors quickly spread as to their intentions.

On Monday, Nov. 13, at 7:30 p.m., the festival will host the Long Island premiere of the comedy Mr. Predictable, the story of a good boy who is enticed into a life full of emotions, passion and romance, at the Great Neck Squire Cinema in Hebrew with English subtitles.

Veterans and military personnel can receive free tickets to all films, courtesy of GEICO, at kacie@gold coastarts.org or 516-829-2570.

For a list of screenings and events, and to purchase tickets, visit www.goldcoastfilmfestival.org.