From a very young age, Kelsey Nathan has had a love for both animals and science, fostering many pets—including a dog, a bearded dragon, a rabbit, a hamster and a goldfish—and has actively volunteered at the North Shore Animal League shelter since she was 11.

Now, 17-year-old Nathan has the opportunity to combine both of her passions through a prestigious research program at Cold Spring Harbor Laboratories called Partners for the Future, which provides high school seniors the opportunity to work in a real-world research lab. 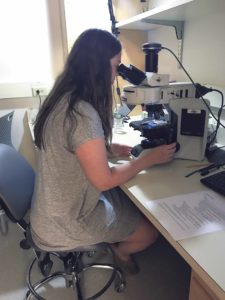 The process began when Nathan’s school, Friends Academy, nominated her as well as three of her peers for the program. Nathan was then asked to write an essay about her interest in the program, get two teacher recommendations and provide her most recent high school transcript.

Once she was chosen as a finalist to be considered for the program, she was interviewed by the various potential mentors from the various labs. This included a round robin where she rotated speaking with the head of the program and HR. Two weeks later, Nathan opened up an exciting letter informing her that she had been selected as a mentee by the head of the program and by Alexandra C. Nowlan, a PhD candidate at Watson School of Biological Sciences. 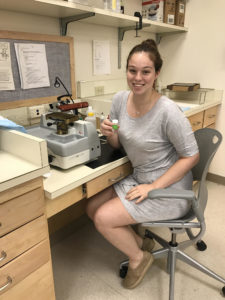 Nathan began her research at the Shea Lab in September. She will work 10 hours a week through March and conclude the program with a presentation showcasing her work.

“The main advantage is in exposing the students to day-to-day life in a working lab,” said a program representative. “Debunking the mythical scientist-in-a-labcoat image, the students are introduced to a world of relatively young scientists and their interactive support staff in a relaxed, problem-solving atmosphere.”

Nathan has had many opportunities and support which led her to this program.

“I have been lucky enough to have wonderful science teachers at Friends Academy who have truly encouraged my love of learning as well as my passion for animals,” said Nathan, who founded the Animal Rights Club at Friends Academy and also participated in the Dupont Challenge. Together with her mentor, Nathan is narrowing down her animal research to a specific area that she is most passionate about.