Great Neck Park District commissioners Dan Nachmanoff and Frank Ciluffo were sworn into office by park district attorney Chris Prior on Thursday evening, Jan. 8, at a park district board meeting. Nachmanoff was sworn in for his second three-year term. Ciluffo was sworn in for a two-year term, his first, filling the two years left of the term vacated several months ago when longtime park commissioner Ruth Tamarin retired. Nachmanoff and Ciluffo won hotly contested elections. 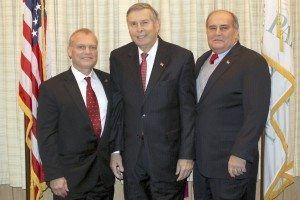 Nachmanoff told the Great Neck Record that he “looks forward to implementing” the bond issue and repairing and refurbishing the park district’s infrastructure.

And, for Nachmanoff, a prime project is building the new park district office. He also noted plans to rehabilitate park district fields. Nachmanoff said that much can now be done with new commissioner Ciluffo (who is constantly at the Parkwood Ice Rink) “watching over this like a hawk.”

Also looking towards the immediate future, Ciluffo is anxious to “improve the (park district) facilities to an even higher standard.” He hopes to continue the “wonderful programs”and add new ones. Ciluffo also emphasized safety and security at all park district sites and spoke of the necessity to “keep costs and spending down.”

Long-time park Commissioner Robert Lincoln, chair of the park board, read his “State of the Parks” address during the meeting. Lincoln said that “the state of our parks is excellent,” the park district “remains financially stable and sound” and the “infrastructure remains in good condition.” Lincoln also made note of the upcoming 100th celebration for the park district.

Said Lincoln: “We look forward to another great year for the Park District in 2015.”