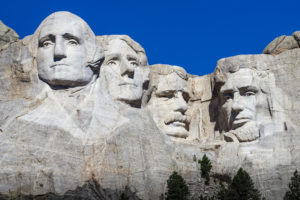 Most Presidents, past and present, have an aphorism or image associated with their tenure as leader of our country. George Washington was stuck with, “I cannot tell a lie.”

Franklin D. Roosevelt’s uplifting words of wisdom in a time of crisis were, “We have nothing to fear but fear itself.”

George W. Bush will be remembered standing on the deck of a battleship in flight gear with a sign behind him reading, “Mission accomplished”—an image he later regretted.

Donald Trump, our current President in the White House, will go down in history for coining the phrases, “Fake news” and “Alternative truth,” which are not particularly admirable. He will be remembered for being the greatest trickster of all time; surpassing Richard Nixon, who was nicknamed Tricky Dick and whined “I’m no crook.”

Trump is a master of illusion. What you hear is not what you get. His words are filled with more hot air than the Goodyear Blimp. A good magician practices distraction or trompe l’oeil (fool the eye). In Mr. Trump’s case, it’s used as a deception for his base, or anyone else he can dupe.

As we get closer to the truth in the Russian caper, our President needs a really big distraction to cover his tracks. I hope he doesn’t implement the tactic invented by Dustin Hoffman’s character in the movie Wag the Dog, where he used the fog of war, the ultimate distraction, in order to promote a crisis. This would be a diversion to cover the President’s deeds on a grand scale. But, this is the real world, does he not understand? Everyone is entitled to his or her own political opinion, however, there is a lot at stake here, namely our democracy.

The press has been relentless in digging up dirt in order to depose Mr. Trump. They will have to dig up the lost city of Atlantis before they find all the chicanery buried under his realm. Keep digging press, something that will bring down this house of cards will turn up—with the caveat that the information sticks and will not be discredited as “false news” by the opposition, whomever they might be.

I am hopeful that this era of disgraceful behavior by our White House and opposing parties will cease and desist before I get too old to march. My patience is waning. This fiasco has dragged on too long. As Trump himself has said, “I could shoot someone in Times Square and they (my base) would still love me.” I hope our elected officials will act before it’s too late, before the shooting begins.

Lyndon B. Johnson stopped campaigning for reelection after the demonstrators and students protesting the Vietnam War were ignored and, subsequently, their protests turned into riots. I remain optimistic that this state of affairs will end, and democracy will be saved by the ballot box.

Presidents Day will come and go. I hope we will have something to celebrate next year.