How will this drama end?

For almost 30 years, the building at the corner of Maple Drive and Middle Neck Road has been awaiting completion of the final act of a drama tentatively entitled Our Great Neck Playhouse.

Act I began in 1922 when David Baron of Great Neck built the Playhouse Theatre. It had a seating capacity of 1,500, an orchestra pit, meeting space and an organ like the one at the Rialto Theatre in Manhattan. Residents fortunate enough to have seen the interior describe its beauty. George Duck, former manager of the Airdome, an outdoor theater in Great Neck, and the Mayfair Theater on Station Plaza North, was in charge.

The theater was intended to be a space for previewing plays bound for New York. Broadway shows found their way to the Playhouse as well. On nights when shows weren’t scheduled, motion pictures and high-class vaudeville acts were to be presented, according to an article in the Brooklyn Eagle.

In 1925, Straight Shooter starring George Abbott was the first play to premiere. During the 1925 season, 29 shows opened at the Playhouse. One of those plays was a stage adaptation of The Great Gatsby, the novel written by former Great Neck resident F. Scott Fitzgerald. Reviews were not favorable.

The Playhouse promised a show a week in 1927. That year, the Great Neck Record listed at least 20 productions, including Ethel Barrymore in Constant Wife, and Oscar Shaw and Gertrude Lawrence in Oh-Kay.

Prior to its Broadway opening, Talk About the Girls opened for one night with “the most critical audiences ever gathered in Great Neck,” including Arthur Hammerstein, Oscar Hammerstein II, Sam Harris, Gene Buck, Florence Moore, Olga Petrova, Jesse Livermore, and Walter Chrysler, all Great Neck residents. Also present were Arthur Lesser, owner of the Playhouse, Joseph Grace and Captain Russell. During that year, a program for the benefit of St. Aloysius Church featured every renowned star, including Great Neck residents Gene Buck, Eddie Cantor, George M. Cohan and the Marx Brothers, according to the Great Neck Record.

The plot thickens in Act II with the approach of the Great Depression. In 1929, the Playhouse was purchased by William Fox, who turned over booking for the Fox Playhouse to Louis Werba. Werba quickly filed for bankruptcy. All Fox theaters closed except for the Great Neck Playhouse and a theater in Long Beach. In the tight economy of the 1930s, organizations such as Vassar Alumnae, the Woman’s Club and St. Aloysius Auxiliary were selling benefit tickets to Playhouse productions. It was also reported that the Playhouse had succumbed to the movies. However, in 1932, Great Neck resident Ernest Truex starred in a performance of Whistling in the Dark before it opened in Manhattan.

The Playhouse, then part of the Skouras chain, closed in 1940 to redecorate and add new seats, sound equipment and a new screen. In January 1941, competition arrived. The Squire movie theater opened on Middle Neck Road, across from the remodeled Playhouse. Various activities were held in both theaters. The two joined the war effort by selling war bonds and added a special matinée to collect scrap metal.

Possibly signifying the need to improve ticket sales in 1949, the Miss Great Neck Beauty Contest was announced, with the winner to be selected by audience applause. In later years, talent shows were added. 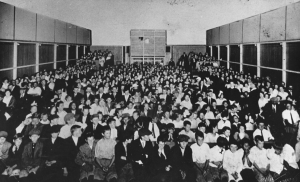 In November 1956, the International Rescue Committee raised $7,000 for Hungarian refugees with a five-hour presentation led by Magda Gabor. A telephone connection with Las Vegas hotels brought in the voices of Liberace and Lena Horne. Movies continued to be shown into the early 1980s. One resident vividly remembers Flash Gordon and Superman II. “Every kid in my junior high school must have been there.”

Skip to Act III. In an attempt to revive the 60-year-old Playhouse as a legitimate theater, Santangelo Productions took over the lease in early 1983. The first production was Oscar Wilde’s The Importance of Being Ernest, followed by Tintypes and Talley’s Folly. Then, on March 1, 1983, the Playhouse went out of business, citing poor box office sales. Hollywood Hotel, a burlesque revue, was playing at the time. After the theater closed, space that had been used as dressing rooms and offices was converted to apartments, but have been empty for some time.

Act IV of this drama is being written by the Village of Great Neck Estates and the owners of the property. It may well end in tragedy for the theater, which has been a landmark in a community long involved in the entertainment industry. For several years, the Village has been reviewing plans to demolish the theater and replace it with an apartment building. Currently, they are awaiting stalled demolition permits from Nassau County inspectors. Stay tuned for the final act.

Leila Mattson is the historian for the Great Neck Historical Society.