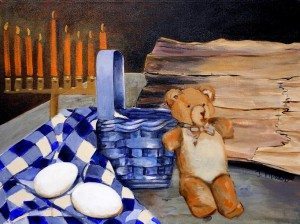 Each year since 1997, the Great Neck Record helps the community celebrate Chanukah with a featured painting by local artist Dr. John E. Hirsch. This year the Record wishes one and all a “Happy Chanukah” with Hirsch’s 2013 “Chanukah Bear Painting.”

Hirsch, a renowned artist, has had his work shown in galleries and museums throughout the country; most recently in a group show at The Graphic Eye Gallery in Port Washington. Currently three of Hirsch’s work are traveling throughout the U.S. as part of the ground-breaking Hebrew Union College Museum’s exhibition, “The Sexuality Spectrum,” which was on display in Manhattan for several months.

During the summer of 2013, Hirsch was represented in shows at Chelsea Mansion in East Norwich and at the Jericho library. Over the years, Hirsch’s work has been exhibited in many galleries and arts festivals in Great Neck and several other locations. His work is included in private collections in both the United States and Europe.

In addition to Hirsch’s work each year for the Record, he was commissioned by the UAHC/CCAR AIDS Committee, in 1989 and in 1991, to design AIDS quilt panels. A copy of his first quilt panel, entitled “Tikvah,” was used as an art poster which was distributed internationally. His second quilt panel was reproduced as a greeting card. The original quilts themselves have been displayed throughout America as well as internationally, including in Israel.

A long-time member of United Scenic Artists, Local 829 (the professional theatrical designers union) as a costume designer, Hirsch’s designs have been worn in productions from Soho to Lincoln Center, as well as regional theatres throughout the country. He is listed for his theatrical designs in Who’s Who in Entertainment.

Hirsch is the director and curator of the Elsie K. Rudin Judaica Museum at Temple Beth-El of Great Neck, where he is a member.

He began his artistic training in the art department of the University of Georgia and received a BFA from the Ringling College of Art and Design (1967), an MFA in design from New York University Tisch School of the Arts (1976) and a Ph.D. from the NYU Graduate School of Arts and Sciences (1988).