The Village of Great Neck’s plan to build a new village hall and adjacent Department of Public Works facility on East Shore Road took an important step forward last week with its selection of an architectural firm to supervise the project. 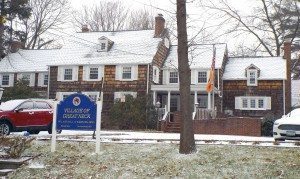 The plan, utilizing the land where the sewer plant formerly operated, has a direct connection to the recent rezoning of Middle Neck Road to allow multifamily residences and make the business district more walkable. The village anticipates selling the current DPW facility on 765 Middle Neck Rd.

“In connection with our rezoning,” Mayor Ralph Kreitzman said,” the DPW doesn’t belong in a residential zone.” During the course of the rezoning work and discussions, the question as to what would be done with the DPW facility was a constant.

“The facility is exceptionally old,” Kreitzman explained. “The thought was that the land would become housing and we would sell it. We believe that the sale of that would more than pay for a new DPW and probably more.”

When asked about the need for a new village hall, the mayor said, “It’s an old, old building. It isn’t laid out efficiently. It does not have an elevator so there are ADA (Americans With Disabilities Act) issues. There’s no adequate parking. It is in need of significant work.”

“Then there’s the opportunity, given the removal of the sewer plant, of efficiency of building at one site and sharing things like parking,” Kreitzman added, in speaking about the practicality of combining a new village hall with a new DPW on the site. “That property has been thoroughly cleaned and everything has been removed from the site.”

The mayor and board of trustees unanimously approved H2M architects + engineers of Melville at its regular meeting last week from among three finalists.

Kreitzman expressed his confidence in H2M, which has a 30-year history of working with the village on engineering projects. “That had nothing to do with it,” said the mayor. “We’ve never dealt with them on the architectural side but it’s a large part of their practice.”

H2M came in with a low bid of $508,000 while other finalists submitted bids that were substantially higher. “They won on both counts,” Kreitzman said, referring to price and ability.

The current village hall at 61 Baker Hill Rd. has a history that goes back over 200 years. Part of it was a farmhouse owned by the Baker family. The Bakers actually moved it across the street to its present location. The village acquired the building in 1955 and renovated it. A fire in the 70’s caused significant damage. The garage structure behind the village hall once had apartments on the second floor.

Prior to that, rented space at the corner of Baker Hill Road and Middle Neck Road served as the village’s headquarters.

As to what will happen with the old building, the mayor said that there were no plans yet.

Costs of the new buildings are hard to estimate, as the planning stage has not really begun. A formal meeting between H2M and village officials was held this past Monday afternoon to begin the process.

Asked about target dates for the various phases of planning and actual construction, Kreitzman said, “We want to do it as quickly as possible but not foolishly in a way that would cost extra money. We’d like to do it as promptly as it is practical.”