A yearning for the “good old days” led Kenny Wiesen to bring Bonomo’s Turkish Taffy back to life after being dormant for almost 40 years, and it also led to his return to Great Neck after over 20 years.

Wiesen, the CEO of the successful and still-growing Bonomo’s line, started thinking about bringing back one of the favorite candies of his youth during the 90’s, acquired the trademark rights in 2003 and brought the taffy all the way back almost five years ago. 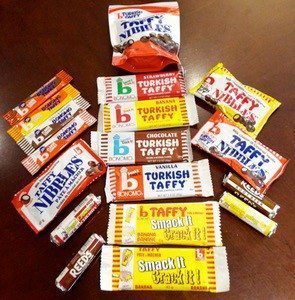 The return to Great Neck happened a little over a year ago when he and his son, Jordan, looking for larger space, moved into 8 Bond Street in Great Neck Plaza, from a Carle Place location.

Wiesen and Sharon, his wife of 30 years, sold their home in Great Neck when Jordan was just four and moved farther out on the North Shore. “Even after we moved, my mother still brought me back here to walk around town,” said Jordan.

Jordan graduated Lehigh University with a master’s degree in engineering and has two sisters, Brittany and Samantha. He still vividly remembers his visits to Gino’s, his pediatrician and getting his first pair of shoes at Postur-line on Middle Neck Road.

“It’s really been a family affair,” Jordan’s father said. “When we were first started working on bringing back Bonomo’s Turkish Taffy, we probably tried 2,000 flavors, personally. We actually tested them all in the kitchen.”

Of the motivation behind the rebirth of Bonomo’s, Wiesen says, “I wanted to find a candy from my youth. People love to reminisce. The old days are mystical. Our business taps into that.”

“We regret it,” said his father of the move away from Great Neck. “I didn’t like the fact that the town that we moved to didn’t have a village. That’s a major consideration once you recognize what it takes away. It doesn’t have that kind of community-based feeling that a town offers.”

“So if you have a village, a downtown area, it kind of defines everything that surrounds it,” said Wiesen, who still practices law. “I believe that without that, no matter how nice the homes are, it doesn’t give you that feeling.”

“We were always in love with Great Neck,” he continued. “Jordan and I love to walk. What better place is there to walk around but in a town as interesting as Great Neck?” Wiesen indicated that the family has even talked about the possibility of purchasing a home again on the peninsula.

The Wiesens looked at many available office spaces from Port Washington to Manhasset to Little Neck, but finally chose Patrick Silberstein’s painstakingly restored building, in another nod to the way things “used to be.” The building, first constructed in 1926, has nationally designated landmark status.

“Once we saw the building, we fell in love with it,” said Jordan, who handles the advertising and social media areas of the business.

“We really didn’t choose the building,” added his father. “The building and Patrick chose us. It’s quite a unique building in that Patrick has kind of created this environment based upon the people that are the tenants as opposed to just filling up space.”

Silberstein was fascinated by the Wiesens’ business model when they met. “I am always interested in iconoclastic ideas,” said Silberstein. “I was intrigued, amused and stupefied that someone could revive an old candy line that had long disappeared from the shelves.”

In May, the Wiesens will be introducing their iconic label that will bring back Reeds root beer, cinnamon and butterscotch hard candies and also the Regal Crown brand, sour lemon and sour cherry.

They’re also partnering with Kedem to produce a kosher line and will soon reintroduce “Bar None” chocolate bars to the market.