For a while now, kids have been arguing the superiority between Great Neck North and Great Neck South High School. Even most residents in Great Neck who didn’t attend either of these schools have heard about it and have a say in the debate.

To understand why this rivalry even exists and why it’s so deeply rooted in Great Neck, we must first take a walk back into the long history of the schools. Both schools have an illustrious history, with Great Neck North schools being constructed in 1895 and the Great Neck South schools being constructed in 1958. Residents of Great Neck have been debating either side’s superiority for a while, and since both schools are about a 15-minute drive apart, it’s not surprising friendly rivalry and healthy competition has blossomed. While North and South do not have intense competition against each other like Harvard and Yale do, things can definitely heat up when each of the school’s academic and/or athletic performance is brought up.

Oftentimes, when friends and I talk about the rivalry, we can get into a pretty good argument. My friend Allan who used to go to Great Neck South was with me about a week ago, and I brought up the topic of how people always argue about North and South. He then proceeded to list reasons of why South was better than North, and I did the same for North. The rivalry, whether for better or for worse, is a great conversation starter. 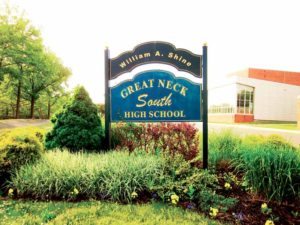 While North and South have many similarities, their differences play a big role in this debate. North and South have very different demographics, which many residents of Great Neck point out. Great Neck North is comprised of a large percentage of the Jewish population in Great Neck and a small percentage of other ethnicities. Great Neck South, on the other hand, has a large number of students from all sorts of Asian backgrounds. The architectures of both schools are also different. Great Neck South’s buildings are very modern and up-to-date, having been constructed only a few decades ago. Great Neck North buildings are more old-fashioned, especially the high school. How these affect both schools can be seen in the technology they use and the facilities they have at their disposal.

At the end of the day, North and South are still part of the same school district—Great Neck Public Schools. In the long run, as long as all the schools are united under one district, students should be aiming to move Great Neck forward together as one, not as separate, competitive groups. If one day that goal is accomplished, then we can continue to educate our great district and really strive for excellence in all fields of learning.