Table tennis, aka ping-pong, is no longer just a basement recreational sport. After gaining popularity and becoming an Olympic sport in 1988 and a collegiate sport in 1993, it became an official New York City winter varsity sport in 2014. Great Neck has caught the table tennis fever and now has table tennis teams in Great Neck North High and South High. An evening recreational program on Tuesdays and Thursdays, led by Coach FeiMing Tong, has exposed many students to table tennis and has elevated the level of play for many others.

During the Table Tennis Invitational, the North High gymnasium was transformed into a professional table tennis arena boasting 12 tables, concession stands and an artifact display from the late Sol Schiff, a member of the U.S. Table Tennis Hall of Fame. The day began with team competitions, where nine teams played in round robins. Each match consisted of four single matches and one doubles match. The top two teams in each round robin advanced.

The singles competitions began at 10 a.m. with North High and Middle, and South, Herricks and Roslyn Middle Schools all participating in the Novice Division. North Middle, however, took home all the trophies with Ilan Rastegar in first place, Cary Ho in second and Ryan Liu in third. The competition was fierce but friendly in the Intermediate Division of 21 players. Kevin Ho of South High came in first place, Owen Lin of Brooklyn Tech came in second and Katherine Dong of Willets Road School came in third. The Advanced Division ended in a duel between brothers from Brooklyn Tech. William Song came out the victor while Michael Song came in second and Timothy Lee from North High came in third place. 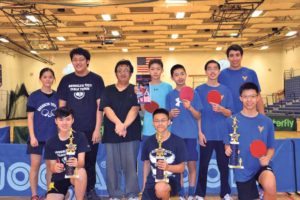 World-renowned Coach Tong was present for the entire day, coaching the Great Neck North High team and offering pointers to others. She hopes that more children will be exposed to the sport and enjoy it as much as she does. Tong has coached many Olympians and hopes that “like New York City, Nassau County can soon make table tennis a varsity sport.”

Tahl Leibovitz, Para-Olympic gold medalist, also came to support the Table Tennis Invitational. He was so glad to see the large number of kids participating and presented a signed copy of his book, Ping Pong for Fighters, to the winning team.

North High Principal Bernard Kaplan and Assistant Principal Dr. Daniel Krauz came to cheer on the Blazers. They were delighted to see the gymnasium filled with energy and excitement. Dr. Teresa Prendergast, superintendent of Great Neck Public Schools, witnessed the larger turnout and increased school participation this year as compared to last year. She was glad to see the sport gain popularity, as table tennis is one of the safest sports that is unique because fair competition can exist among middle and high school students, and male and female players are on equal playing fields.

The day concluded with many happy students and parents all looking forward to the third annual table tennis tournament.