A light drizzle did not stop Great Neck North High School students from following through with an organized Walk Out and March to End Gun Violence on Thursday, May 31.

Approximately 60 students left their classes at 1:15 p.m. and walked along Middle Neck Road to the Village Green Park. The students stayed out of school until the final bell. The teens carried signs and spoke to adult activists, elected officials, local police and reporters. They advocated for change and for new laws to be passed in Congress. Through their advocacy, they demonstrated leadership and passion for a just cause: calling for the end of senseless gun violence in our society.

This rally was the third organized event in Great Neck in the past few months, motivated by the brutal slaying of innocent teenagers in Parkland, FL, on Feb. 14. All of the rallies on the peninsula have been led by students.

Public school officials and teachers have supported the efforts of these student activists. As a result, Great Neck’s students have been much more vocal and organized about addressing the issue of gun violence than students in neighboring districts.

The May 31 walkout was led by students Chloe Heiden and Shira Geula. Through their efforts, the event was publicized, and local activists were invited to speak at the event. Great Neck gun activist and author Lois Schaffer shared her experience and knowledge with the students. Town of North Hempstead Councilwoman Anna Kaplan and Brad Schwartz, Democratic candidates for New York State senator, were also present to lend their support. Increased gun safety is an important part of the party platform at the local, state and federal level. New York voters have expressed the need for more stringent laws to keep guns out of the hands of domestic batterers, criminals and the mentally ill.

Paul Guttenberg of Commack, uncle of 14-year-old Jamie Guttenberg who was killed at Marjorie Stoneman Douglas High School, was also a speaker and an integral part of the May 31 event. He wore an orange T-shirt that read “#msdstrong” in support of the gun control movement and the students of Parkland, FL.

“She was killed on Feb. 14 at the Parkland shooting, or mass shooting, I should say,” said Guttenberg. “She was one of 17 victims, as well as 17 others injured. I’m here to support the students from Great Neck and all the youth movements. They are the change. They are the difference, and if we’re going to create new laws and improve gun safety it has to be through the youth movement. My generation and older people are on the wrong side of the issue. I’m hoping that through rallies such as this, we can increase voter registration and bring out more votes with kids between 18 to 25.”

The student organizers provided the following joint statement to the Great Neck Record: “Rarely have I ever thought in earnest of my mortality, and it has not been until recently that I’ve been forced to do so. In the world we live in today, children throughout our country know what an active shooter is. We know exactly what precautions we must take if there is a lockdown drill, because our administration has been forced to take proper measures to ensure that teenagers know how to avoid being shot by an intruder in our own school. We know full well what a gun sounds like because we’ve seen, over and over again, snaps from victims of school shootings throughout the country, such as those posted by Parkland students of Marjory Stoneman Douglas High School. We, American teenagers, are growing up in a country which is plagued by gun violence at every turn. 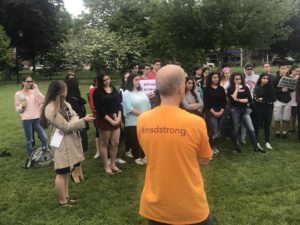 “According to Everytown for Gun Safety, there have been exactly 312 school shootings since 2013 and, already, more than 42 just this year. But, I don’t need to share facts and figures with any of my fellow students, because they all know, just as I do, that we are being targeted and hunted as a people. Children should never be subjected to the brutality that our peers in Parkland or Santa Fe have survived—or passed away from. Students throughout our country must stand together to stop this violence under one unifying message of safety for all students in the United States of America, because we cannot be another statistic. As a student body, we have an obligation to take action and stand up for our right to be educated in an environment free of violence and bloodshed, but we must target the root of the problem before we heal ourselves and our community.”

Notably, the students also addressed the issue of mental health and its relationship to gun violence.

“The true cause of the slaughtering of the students which we have mourned is not mental-health awareness—although many of these shooters have had previous histories of mental illness—but lacking gun laws and regulations,” said the students. “We must band together and urge our congressional representatives to vote in favor of our right to live and to support bills which prevent those who should not have guns from owning or having access to them. Children, the mentally or physically incapacitated and disabled, those who have previous criminal records and other current, unfit gun owners should never, under any circumstances, have access to weapons which can—and will—result in more deaths in our schools.”

As far as the issue of gun control and the Second Amendment, the students said, “We must also urge our representatives to ban assault-style weapons such as the AR-15 used at Parkland and bump stocks, which are weapons and tools of war and should never logically be used for hunting or other mundane purposes. Let me be extremely clear when I say that I, and my fellow students, do not advocate for a ban on all guns or regulations which seek to prohibit lawful, competent citizens from owning and operating guns; we wish, in fact, to protect our Constitution’s Second Amendment.

“However, at what price are the lives of children? Those who do not have the capacity to operate weapons cannot have the right to do so, or else we face a threat to our own mortality which no teenager should ever be forced to endure. But we confront this threat as a group—a force greater than we can even now comprehend. We are not alone, and we must not fight for stricter regulations and laws alone.”

The March for Our Lives rally on March 24, which also featured student leaders and had the wide support of teachers, local clergy and bipartisan elected leaders, was organized by North Shore Action, a Great Neck–based social action group. The group’s founders, Beth Friedmann and Veronica Lurvey, were supportive of the May 31 walkout.

“These eloquent and thoughtful students are leading us towards a safer future and we applaud their actions,” said Friedmann and Lurvey. “It is incumbent upon all adults, especially our elected officials, to listen carefully or we will be on the wrong side of history. These students are watching your actions and will be voting soon. North Shore Action looks forward to working with them on an event in the fall.”

Jacqueline Harounian is a frequent contributor to the Great Neck Record.