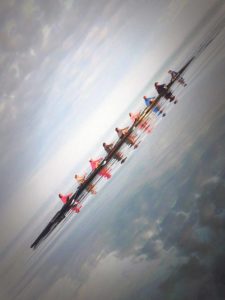 Great Neck North High School alum Lauren Pomerantz is killing it in college on the Hobart and William Smith (HWS) rowing team. She was chosen as a Collegiate Rowing Coaches Association National Scholar-Athlete, which is granted to student athletes who obtain a GPA of 3.5 or higher during their athletic career. Besides winning a gold medal at the Liberty League Championships when she defeated the runner-up from Rochester Institute of Technology by more than 8 seconds, Pomerantz was recognized as a National Invitational Rowing Championships All-Academic. These prestigious accolades are awarded to college students who are dedicated to both their studies and their sports. 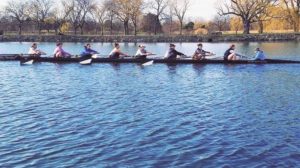 The rowing team at Hobart and William Smith offers opportunities for people to simply walk on very early each year. Pomerantz and her friends gave it a shot during one of her first days of school and attended a meeting. She enjoyed the experience of meeting the current teammates so much that she decided to continue with this sport that was brand new to her. Once Pomerantz learned how to “erg,” or use the rowing machines, the rest was history.

“As a 5-foot-tall person who had never rowed in my life, I wasn’t really expecting myself to accomplish all that much when I first joined the team my freshman year,” she quipped. 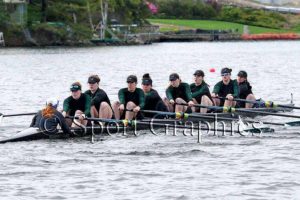 Rowing has taught Pomerantz to push herself beyond her perceived limits, and how to be a stronger person, both mentally and physically. One of Pomerantz’s most grueling workouts is a 75-minute test.

“Erging for 75 minutes is truly a mental test and you have to be able to focus for that long without giving up, because it is so much easier to just stop and get off,” she explained and revealed that rowing has “taught me mostly that the only limits we really have are the ones we set for ourselves.” 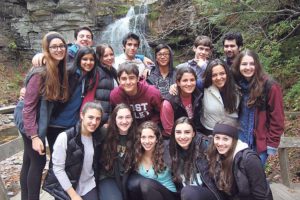 Being part of a team has also taught Pomerantz how strong other people are and how to work together with others. Teamwork is essential in this sport, since, as Pomerantz put it, “you’re only as fast as your slowest rower.”

Pomerantz observed that her teammates lift each other up and push each other not only to be the best rowers, but also to be the best women that they can be. This seems fitting for the setting of the college in Geneva, where the first women’s rights convention was held in Seneca Falls in 1848.

In the grand scheme of things, rowing has made Pomerantz a better communicator, and has prepared her for a career where you might have to work with others to achieve a goal.

Pomerantz admits that “having rowing practices forces you to be a more organized student,” since there is no time to procrastinate. Staying organized is essential for Pomerantz. Whenever she has free time, she’s usually in the library or in a lab getting work done. The student athlete also works a few jobs and takes part in other clubs and activities on campus, so she makes sure to start assignments early. 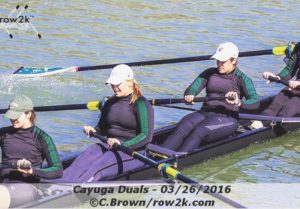 “It’s hard to do a lot of work after practice because you are so drained by the end of the day,” she remarked. “As long as you stay on top of your work and don’t let too much pile up, rowing doesn’t negatively impact your studying habits.”

Pomerantz is currently doing computational neuroscience work, in which she is using models to show different methods for various areas of the cerebral cortex to send messages to one another. She wanted a novel experience from Great Neck North High School, and HWS provided that. She loved her experience at North and affirms that
it has shaped her into who she is today.

“I made lifelong friends and had countless opportunities and experiences I will never forget and always cherish,” she said. Pomerantz knew that she wanted to go somewhere that was “decently far away,” but close enough to get home for a weekend if she needed to. She credits Alan Schorn and Dr. Van, who worked with her in Science Research, for inspiring her from the time she was a freshman. She praised her teachers for being immensely passionate about what they were teaching.

“They taught me more than just material,” she expressed, and explained how they taught her to “explore and pursue the things that I love most.”

At North High school, there isn’t much Pomerantz didn’t accomplish. She played soccer, basketball and softball, and tried fencing for one year. She was active in Model Congress, Model UN, Research Project Seminar, was a captain for Relay for Life for a few years, a Peer Leader for two years and was in athletic leadership. Pomerantz was also part of Community School, a highly selective alternative to traditional education, where students take a more active role in the learning process.

Pomerantz chose HWS because of its small-class size and focus on experiential learning, similar to the Community School program that she participated in at North.

According to Pomerantz, “professors know your name within the first two to three classes, and you don’t feel like a number.” The environment of the school is also idyllic for her, as she expressed how Seneca Lake is the perfect backdrop for a college. For Pomerantz, going to HWS wasn’t really that big of an adjustment. Making friends was an easy task as she joined the rowing team within the first week at school, as well as a bunch of other clubs, and met a lot of great people. She emphasized that college students are consumed with work, so there isn’t much to notice about how different your surroundings are from wherever you went to high school.

Pomerantz is spending the summer doing research and majors in neuroscience with a minor in chemistry, and plans on going to medical school after gapping a few years to conduct research. Whether in the lab or on a boat, she will certainly continue to succeed in every endeavor she pursues.