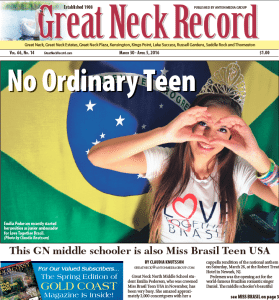 Great Neck North Middle School student Emilia Pedersen, who was crowned Miss Brasil Teen USA in November, has been very busy. She amazed approximately 3,000 concertgoers with her a cappella rendition of the national anthem on Saturday, March 26, at the Robert Treat Hotel in Newark, NJ.

Pedersen was the opening act for the world-famous Brazilian romantic singer Daniel. The middle schooler’s beautiful performance brought tears to the audience’s eyes, and the talented teenager already agreed to perform at the promoter’s next concert.

Miss Brasil Teen USA also had the opportunity to interview Daniel, who is celebrating his 30th anniversary as a performer, touring in major cities around the U.S. “I will give you my book and DVD and I hope that you will have time to read the book that explains my career and passions,” said Daniel, who told the young performer, “I wish you success in your career.”

During the event, Daniel posed for pictures with attendees and Pedersen autographed copies of the February issue of Alô Você magazine, which featured her on the cover.

For the performance at the Robert Treat Hotel, Pedersen worked closely with Marcilia Luzbet of Luzbet Productions. The promoter of the event has brought together Latin singers from all over South America to perform throughout the United States in places like Florida, New Jersey, Massachusetts and New York. 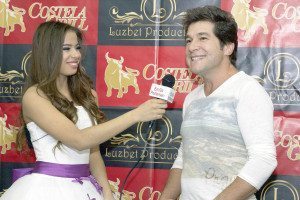 “My goal is to bring diverse talent to the USA and I am proud to show my respect for the country by opening the show with the American national anthem sung by a singer with a multicultural background like Emilia Pedersen,” said Luzbet.

Pedersen was also invited to sing at a boxing match on Saturday, March 12, at the Hempstead Boxing Club. She opened the event singing “The Star-Spangled Banner” a cappella at that event, too, right before children and adults began their fights.

But that’s not all this ambitious singer has accomplished; Pedersen also recently started her position as junior ambassador for Love Together Brasil. 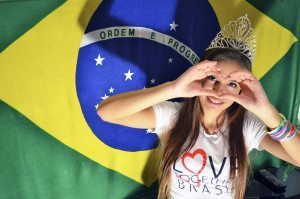 Pedersen had an interview with Carlos Borges from the International Brazilian Press Awards on Monday, March 21, where she talked about her position as junior ambassador as well as her aspirations for her future career in entertainment. 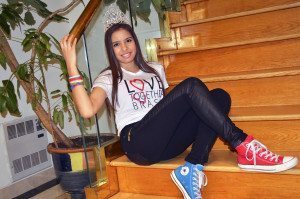 “I’m Danish and Brazilian and I associate with both sides,” said Pedersen. “When people ask me why I wear two different sneakers, I say it’s because that’s who I am.”

And when asked about her most memorable modeling experience, she talked about the time she had to model with two left shoes.

“I had to rush on stage last minute for a modeling gig and there were only two left feet of the same shoe,” she recalled. “One belonged to my mother, the other to me. This experience taught me to always adapt to the circumstances and never let any small mishaps stop me from achieving my goals,” said Pedersen.

At Great Neck North Middle School, she currently holds the record in high jump, and is excited to start running track again this year, where she hopes to improve her personal record.

View a video of Pedersen’s performance on her Facebook page and flip through Alô Você magazine at www.issuu.com/alovoce/docs/alovoce_ed034_201602b.