When considering the hallmarks of a strong family, one often thinks of words like stability, tradition and care. Perhaps it’s no coincidence that those same words have served as a de facto mantra for Great Neck Alert, dating all the way back to its inception in 1901.

The volunteer fire company has thrived largely on the strength of several generations of community members who dedicated themselves to making a difference.

“My father’s uncle, a gentleman named Joe Krampton, who had a very large construction business in Great Neck, was a charter member of the fire department in 1901,” says Peter Meade, ex-president and a 50-year member of Great Neck Alert. “My older brother [was involved] and my nephew was as well.”

“For years, that’s kind of the way the fire company was,” adds Great Neck Alert president Michael Berry. “Your parents were members and you grew up [and joined]. And then they started a junior program, I think it was in 1982. Basically the kids would join and now their kids are joining. It’s been like a family business.”

According to Fire Chief James Nubert, the addition of the junior program has paid dividends towards maintaining the fire department’s familial traditions, and has also made it possible for aspiring firefighters to get a feel for the responsibilities of the job at an early age. Great Neck Alert currently has a full junior roster, composed of 30 kids from ages 12 to 16. By age 17, junior firefighters can attain full membership, a feat which three current Great Neck High School students have already achieved.

“They do kind of the same tasks and skills that we do, on a lesser level,” Nubert says. “When they get to the age where they can join, they already have some training under their belts.” 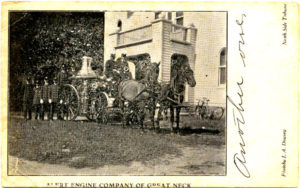 Needless to say, it’s taken a remarkable amount of consistency for the department to remain a fixture for 116 years, but Meade notes that much has changed in both the department and the community it serves. For one thing, Meade recalls a time in which the firehouse was something of a makeshift community center, in which kids could hang out, do their homework and interact with the department’s older members. Those days, for the most part, are over, Meade says.

“I also think there’s a cultural divide in that, when I joined, the old-timers took you under their wing,” Meade continues. “I had friends that were in the firehouse 20 years before I joined who became friends of mine very quickly, nurtured me along and mentored me. Today, you don’t see a tremendous amount of that; it’s because they’re not in the firehouse. People don’t hang out the way they used to. Younger members don’t get to spend a lot of time with the senior people.”

“The commitment that’s needed in a fire company nowadays is much tougher,” adds Berry. “And it makes it a lot tougher to maintain members, to stay in the community, because the restrictions are tighter and the community has changed over the years.” 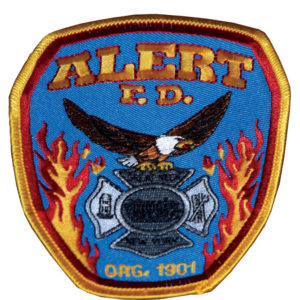 One thing that hasn’t changed, however, is the department’s goal to draft high-character community members into its core membership. Meade considers it a blessing that Great Neck Alert has developed a knack for picking excellent leaders, many of whom are immortalized in photographs on the department’s interior walls, which resembles a fire museum as much as it does a still-functioning firehouse.

“Every day we’re out there—whether it’s a carbon monoxide leak or someone locking themselves out of the house—if we’re helping people, that’s what makes us all retain our membership,” Nubert says.

“There aren’t words to describe some of the emotions, based on things that have happened over the years and the rescues that have been made,” Meade adds. “Those are the memories that never leave you. You can’t buy that for all of the world.”