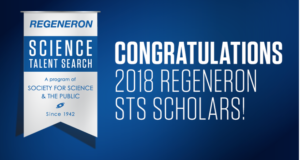 Nine Great Neck students are among the 300 high school seniors who have been named 2018 Regeneron Science Talent Search (Regeneron STS) scholars nationwide. Seven attend the Great Neck Public Schools (GNPS)—three at North High and four at South High—one is a student at North Shore Hebrew Academy and one Kings Point resident goes to The Lawrenceville School in New Jersey.

Previously known as the Westinghouse and then the Intel Science Talent Search, Regeneron STS is the nation’s oldest and most prestigious precollege science competition. Alumni of STS have made extraordinary contributions to science and hold more than 100 of the world’s most coveted science and math honors, including the Nobel Prize and National Medal of Science.

Annually, students entering the Regeneron STS compete for more than $3.1 million in awards. Each scholar, selected from 1,818 entrants, will receive a $2,000 award with an additional $2,000 going to the scholar’s school, resulting in $1.2 million in total awards from Regeneron.

“On behalf of the Great Neck Board of Education, I would like to offer our heartiest congratulations to the nine Great Neck students being recognized as science scholars in the prestigious Regeneron Science Talent Search contest. We are so very proud of all the students who entered their projects. This is a remarkable achievement for this community,” said Barbara Berkowitz, GNPS Board of Education president. “Congratulations are also extended to all their dedicated teachers who work with them and their fellow students on a daily basis to help foster their interest and passion in this area. Certainly, the focus on STEM education has increased dramatically during the past decade, and we are grateful to have forward-thinking educators, and to reside in a community that supports and values education for this and future generations of all our students.”

On Jan. 23, 40 of the top 300 scholars will be named finalists and compete in Washington, DC, in March. Finalists will participate in a rigorous judging process, interact with leading scientists, display their research for the public and meet with national leaders.

“We are delighted to honor this year’s Regeneron Science Talent Search scholars,” said Maya Ajmera, president and CEO of the Society for Science & the Public, which administers the competition, and publisher of Science News. “These brilliant students have already made remarkable scientific achievements at a young age, and we are eager to see where their scientific journeys take them next.”

Find out about the projects each of these students submitted.

For Natasha Dilamani’s Typing Without Touch: A Touchscreen Accessible Device for the Visually Impaired, she created a sensory glove that enables the visually impaired to type on touchscreen devices by creating alpha-numeric characters through the motion of their fingers in mid-air.

For Megan Xu’s Taphonomy of Neoproterozoic Organic-walled Microfossils: The Relationship Between Total Organic Carbon and Presentation Quality, she rated fossils of microorganisms to determine the impact of an environmental factor, total organic carbon (TOC), on the preservation of organic-walled microfossils (OWMs) dating back to the Neoproterozoic Era (c. 1000-541 million years ago).

For Daniel Kim’s project, Quantifying the Affinity of Mutated scFv’s in Chimeric Antigen Receptor T Cells for GD2-Targeted Treatment of Neuroblastoma, he worked on improving a method in which the body’s immune system is used in the treatment of cancer. This method is designed to improve the ability of immune cells to distinguish between cancer and normal cells.

Eric Kuang’s project is Markov Chain Monte Carlo Testing of Cosmological Constant and the Limits of Cosmography with the Union2.1 Supernova Compilation. Cosmic expansion was discovered by Edwin Hubble in 1929 and was confirmed to be accelerating in 1998. Kuang’s project analyzed data obtained from distance measurements of astronomical events with Markov Chain Monte Carlo (MCMC) simulations, a statistical sampling algorithm, implemented in Java, to characterize the overall motion of the universe.

Cindy Wang’s research project, Observation of the Chiral Magnetic Effect in the Quark-Gluon Plasma Produced in Au+Au Collisions at the Relativistic Heavy Ion Collider, also earned Wang the title of Semifinalist in the 2017 Siemens Competition in Math, Science & Technology. Studies of the particles that are generated during collisions of heavy ions shed light on interactions between fundamental particles that make up all matter. In this study, a particular phenomenon, the chiral magnetic effect, that had been postulated by theory but not definitively seen before, was observed.

Michelle Xing’s project, Direct Functionalization of Algal Nanocellulose to Enhance Biosorption for Lead (II) Remediation, also earned Xing the title of Semifinalist in the 2017 Siemens Competition in Math, Science & Technology. Pollution of water with lead and other metals is a serious problem worldwide. Chemical treatments of algae were carried out in order to create nanocellulose, which was then shown to be able to absorb lead ions from water.

Read about the North Shore Hebrew Academy and The Lawrenceville School scholars.