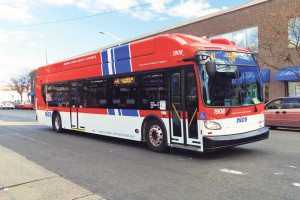 The Nassau County Bus Transit Committee rejected a proposal to eliminate nine NICE bus routes in January 2017, with a split vote of 3-3. Facing the prospect of $6.8 million of decreased funding from the county, NICE CEO Michael Setzer laid out the proposal at a set of hearings before the transit committee on Thursday, Dec. 8, adding that he could be forced to recommend further cuts in April if things did not improve.

Setzer explained that the difference between NICE’s operating costs and revenues are expected to be about $12 million and said the deficit “could conceivably get worse.” He also referred to the chosen January routes as “low-ridership routes,” but added that the chosen April routes, which were not voted on at the hearing, were better routes that could have a big effect on NICE bus riders.

“Nobody in this room, not members of the committee, certainly not people who work for NICE Bus, are happy about looking at this chart at all,” Setzer said at the conclusion of his presentation. “As professionals, we like to carry passengers and we hate to do this kind of thing. But as I tried to say at the beginning, in the end, after we’ve done everything else, this is what’s left.”

Setzer’s plan was met with opposition from some committee members, which contributed to the split vote. Committee Chairman Sheldon Shrenkel questioned some of NICE’s expenses, including $2 million that Setzer said was set aside mainly for wage rates, but also for wage increases. While Shrenkel expressed empathy for NICE, acknowledging that the possibility of a labor strike should always be avoided, he still advised that Setzer refrain from granting wage increases in NICE’s upcoming labor negotiations.

“Certainly everyone likes to see people get a raise when they work hard,” Shenkel said. “But there’s only so many dollars to go around. And I think it’s incumbent upon, as corporations are doing today, you don’t pay bonuses if the company’s not making money. Hopefully in your negotiations you will work hard in trying to make the union understand that the dollars may not be there.”

Setzer countered that his workers needed to be fairly compensated and that competing with other transit operators for workers was “not an easy job.” He also suggested that NICE is underfunded as is and that they do a good job with that limited funding. With a bigger deficit, he said, less popular routes would have to go.

“Costs going up, revenue going down—something has to give,” said Setzer.

The proposal’s rejection bodes well for the dozens of bus riders who attended the hearing to argue against the route eliminations.

“You restore service, only to take it away six months later,” said Westbury resident John Michno, referring to the fact that several of the designated routes had already been eliminated earlier in the year and later reinstated. “You are playing with people’s lives here. It’s almost as if this is some sadistic game with people who depend on buses.”

The proposal was the result of $3.8 million in proposed cuts by Nassau County Executive Ed Mangano to the county’s bus operator, made in an attempt to present a balanced budget to the Nassau County Interim Finance Authority (NIFA). The budget originally passed by the legislature in October was rejected by NIFA, which ordered the county executive and legislature to close a $36 million budget gap that arose when the legislature voted not to approve Mangano’s proposed $105 parking and traffic ticket fee.

To make up the deficit, the legislature is considering funding cuts not only to NICE, but to the police department and every Nassau elected office, including the county executive and legislature. The county will continue to pay $2.6 million in subsidies towards the NICE bus.

—With Additional Reporting by Betsy Abraham