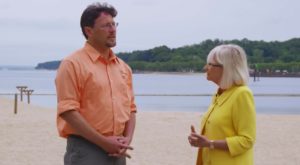 The Town of North Hempstead’s non-commercial government channel North Hempstead Television (NHTV) has been awarded first place for its original nature program Off the Trail, hosted by Ranger Eric Powers. NHTV will be presented 1st place honors in the Entertainment & Arts-Series at the Alliance for Community Media (ACM)’s annual Hometown Media Awards later this summer.

The nature series is directed by Alan Ginsberg and Samantha Hollinde of AGinsberg Productions LLC, and produced by Director of Communications Carole Trottere and biologist Eric Powers of Your Connection to Nature.

Off The Trail takes a look at local nature in the North Hempstead area, observing everything from bats to foxes to horseshoe crabs.

“The town is committed to raising consciousness about the importance of protecting the environment and having a healthy respect for our wildlife,” said Town Supervisor Judi Bosworth. “Shows like Off the Trail serve an educational function, as well as being fun and entertaining.”

Ginsberg is responsible for all of the network’s programming, including new and fresh content weekly and more than 60 new programs each year. The goal of NHTV is to inform the public about all the town has to offer in new and exciting ways. Television programming is available by tuning in to channel 18 or 63 on Cablevision and channel 46 on Verizon FIOS or by logging on to www.mynhtv.com.

The town will be officially presented with its award at the ACM Conference on Aug. 19 in Boston, MA. This is on the heels of the town receiving first place in the Instructional and Training Category at last year’s awards. The goal of the ACM includes advocacy for the protection of public, educational and government access for all communities in the region and the nation.