Village of Great Neck mayoral candidate James Wu introduced himself to voters on Tuesday, May 28, at Great Neck House, branding himself as the “protect-our-schools” candidate who aims to create a revitalization plan based on community input through a thorough survey process.

Wu, a commercial real estate specialist, hosted the community Q&A along with trustee candidates Julia Shields and Harold Citron, who together make up the Village for All ticket, though each candidate is technically running independently of one another.

The three village candidates hope to each replace incumbents Mayor Pedram Bral, Trustee Annie Mendelson and Trustee Steven Hope of the Village Alliance Party, who all are coming to the end of their respective two-year terms.

Wu, a Manhattan commercial real estate specialist and single father of two school-age children, stressed to voters how the school system is the “foundation of our property value.” Wu vowed to “protect our schools,” something which he believes Mayor Bral has not done effectively.

“I don’t think we can afford to have a mayor who is so unambiguously against our schools,” Wu said, citing how Bral “has not been supportive of our bonds or our budgets.”

Wu, who was once a United States Marine, also described his plan for revitalization, a topic that has been highly controversial in the village.

Wu said that instead of instituting a plan solely from his own opinions, his first act would be to conduct a “market survey” and work hard to find out the needs of the community.

“I have my tastes, and my desires, and those aren’t necessarily those of the entire community. [I will] find the broader interest of what the community wants and work from there. I have a vision of finding out what people want,” Wu said.

Wu did say, however, that he does not want to add too much to the already growing village population density. 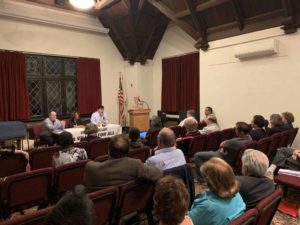 “We should not be looking to maximize every single square inch of our village to pack every single thing in,” Wu said. “There are ways of maximizing profit to our developers and have a fair balance to the community on our quality of life.”

The discussion of revitalization comes after Bral withdrew a proposed amendment to village zoning code. Despite hiring a consulting firm to study the village more than a year ago, no governmental action has been taken.

Wu is joined by Shields, a resident of Great Neck since 1965 and a local champion of the rights of affordable housing tenants.

Shields quit her job as an account executive in 1995 to work for Tenants and Neighbors, a New York State nonprofit. Since then, she has been educating tenants of Great Neck and Nassau County about their rights when it comes to evictions and dealing with landlords.

Shields is running for trustee with a promise to continue her work to protect Great Neck’s affordable housing community.

Harold Citron, a 20-year resident of Great Neck, is also running for trustee. Citron is a retail analyst who believes he can add his expertise to strategize how to go about revitalization. 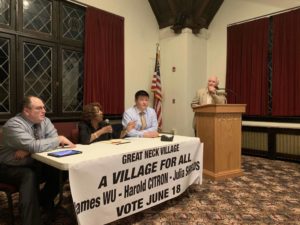 The three candidates all promised to do a better job than Bral has done, and weren’t shy about pointing out what they believe to be flaws in how he has interacted with the community.

“He came out with the promise of not selling the schools Village Hall,” Wu said. “Then he came back and said he was going to sell Village Hall, then he flipped around and said he wasn’t. Now he’s saying again, in the election year, that he’s going to. He flip-flopped back and forth all over the place.”

Wu believes that the Village Hall is just one example of how Bral “flip-flops” on the issues.

“It’s not even an issue of Village Hall, it’s an issue of he has no respect for the institution of the schools and he just uses them on election years and it panders to what he thinks is going to be the vote for him, as opposed to genuinely trying to listen to the needs of the community.”

Wu himself, however, was questioned multiple times by community members about past campaign finance violations he was charged with from a campaign for Queens City Council in 2007.

Wu was fined more than $17,000 dollars by the New York City Campaign Finance Board for 10 violations committed during his 2007 campaign.

“It was a filing error from a loan from my brother,” Wu initially responded. “It was a paper mistake and it was corrected.”

After the meeting, Wu went further into detail about the loan from whom he describes as his “very wealthy brother.” 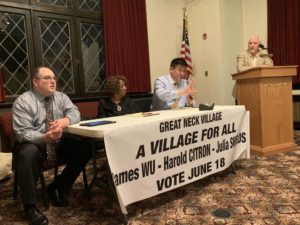 “He lent me $24,000. I recorded it as the word ‘loan.’ It’s called an advance,” Wu said. “He paid it to my printer, instead of paying it to me and then I pay my printer. It has to do with the whole amount of how the money goes and because it goes one way versus another.”

Despite saying that of the 10 violations, “almost every one of those fines attaches to that [loan],” Wu still described how one of the fines referred to a PayPal donation that “wasn’t filed with the CFB (Campaign Finance Board),” and how another violation was from the improper termination of his campaign consultant.