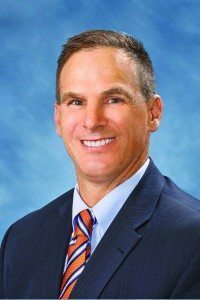 Gerald Cozine is the new principal at the Richard S. Sherman-Great Neck North Middle School. He replaces Dr. Anael Alston who left the district for another position. Cozine traveled a few miles north to become North Middle’s principal, leaving a position at South Middle School where he had been an assistant principal since 2007.

Commenting on his new position, Cozine said, “I am excited to be the new principal of Great Neck North Middle School. The learning community of Great Neck is exceptional and I welcome the opportunity to lead a school here. As principal, I want to celebrate the uniqueness of the middle-level learners as they navigate the often-tumultuous world of middle school and grow socially, emotionally and academically. We, as a school, must engage our students in learning activities that will challenge them to make responsible choices and develop skills as critical thinkers and effective problem-solvers.”

As an assistant principal at South Middle, Cozine oversaw the English, special education and physical education departments, and was the administrator in charge of the seventh-grade “Core” teams. He planned and prepared for the administration of all New York State Assessments, was a key member of administrative committees and developed and implemented the school’s master schedule and budget. His other responsibilities included: overseeing the EXCEL Program for at-risk students, facilitating the school-wide Relay Field Day, assisting the Dean with student behavioral problems, collaborating with feeder schools to provide a smooth transition to South Middle and participating in the school’s Shared Decision Making Committee and Professional Development Group.

Prior to what Cozine calls his “eight great years at South Middle,” he was assistant principal of the Grand Avenue Middle School (grades 7 to 8) in the Bellmore-Merrick Central High School District, a position he held since 2003.

From 1999 to 2003, Cozine held the positions of dean of students and attendance officer/assistant dean at the Ames Ninth-Grade Campus of Massapequa High School.

Cozine has eight years of experience teaching English and writing support in the Massapequa secondary schools.

Cozine is currently in year three of a doctoral program in Educational and Policy Leadership from Hofstra University. He received a Master of Science in school administration and supervision from the College of New Rochelle, and a Bachelor of Arts in English from Hamilton College. He holds a certificate as a New York State School Administrator and Supervisor and permanent certification in English for grades 7 through 12.

Cozine is married with four school-aged children, and enjoys reading and golf. He considers working with middle-level students a “calling,” one he has “been privileged to do for the past 24 years.”