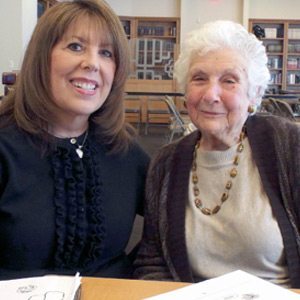 The last day of Passover on April 22nd promises to be a great day of celebration for the Breakstone family, not only due to its religious significance but because it will also mark the 90th birthday of its vibrant family matriarch, Myra Breakstone, who has lived in Great Neck for 60 years.

Moving from an apartment in Flushing to her present home in the old village in 1954, Breakstone, herself, will be hosting her own Seder as usual. But this year’s meal will have close to 40 family members in attendance before they all get together again at a local restaurant to honor Myra’s milestone birthday.

The family is coming in from as far away as Israel and California and as close as upstate New York and Connecticut.

Breakstone admits to a longtime love of Great Neck since she and her husband Robert took their friend’s advice to move here because of the school system. Myra’s husband, a retired dentist, passed away in 2011 after being married for 66 years. Their children, Judy, Diane, David and Amy all grew up in Great Neck. The family now includes 11 grandchildren and six great grandchildren with a seventh on the way.

Myra also has a strong, continued connection to Israel, studying its language and culture regularly. She and her husband spent 30 years dividing their time between living on a kibbutz for six months after Passover and then returning to Great Neck for Thanksgiving.

“I’ve always loved Great Neck because it offers so many things,” she said. “You can be busy morning, noon and night. You can go to the library for lectures, and you can go to Great Neck House for lectures and courses. Something is always happening here. I love the availability.”

She remembers when her eldest daughter, Judy, had to go to a local temple for school because the Baker Hill School hadn’t been finished yet. “I remember taking Judy to Great Neck House, when it was the library, to get her a library card,” she said. “Now I love our libraries.”

Myra, who still drives and lives independently, had a memorable experience several months ago at the main branch. She was downstairs in the media room near closing on a Sunday afternoon when personnel locked up not realizing that she was still there. It took a little while, but she was freed without harm.

The Breakstones first became interested in Israel through Judy. “My daughter went to Israel after she graduated from college in 1968,” explained Myra. “She was wondering what to do and volunteered to go.” Judy eventually married an Israeli citizen and settled there.

Judy’s parents visited her often. “My husband always took the summers off and he wrote to people in Israel and asked if there was anything that he could do,” said Myra. “We kept going during the summers and one day he said to me, ’How would you like to live there for 6 months a year?’

Her husband volunteered his dental services to the Israelis while Myra worked in childcare. Robert started an organization called American Dental Volunteers for Israel that helped boost that country’s dental services, somewhat lacking until the last 10 years.

Breakstone started studying and speaking Hebrew 40 years ago. “I wanted to be able to speak to my grandchildren who were in Israel,” she said. “I started learning Hebrew on the kibbutz and, believe me, it’s not easy to learn Hebrew when you’re almost 50.” She found, though, that opportunities to learn there weren’t great because so many people there used English.

About a year ago she signed up for a class in conversational Hebrew with teacher Gail Zuckerman and several other women. Asked why she felt the need to improve her Hebrew skills, she admitted, “I’m not very good at it. I’ve also been learning bridge for over 40 years and I don’t do that too well either.”

Zuckerman, a Great Neck resident 40 years, admits that she’s never met anyone quite as unique as her student. “Myra is really a special lady,” said Zuckerman. “She’s elegant and refined. She generates an aura of warmth.”

Myra is planning to visit her family in Israel next winter. She now has three grandchildren and three great grandchildren there. She was there as recently as last June and figures that this time around, with so many family members coming in for her birthday, she’ll have a good time hosting them in her own home instead. 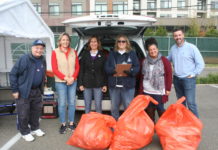 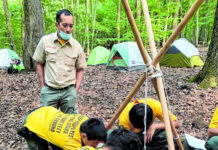