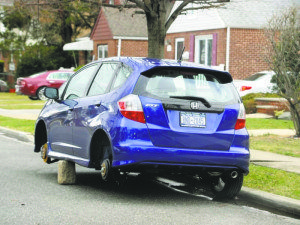 Since September 2015, 116 tire and rim burglaries have occurred throughout the county, with 26 as of the beginning of the year, according to the Nassau County Police Department (NCPD).

Most of these incidents have occurred in the Valley Stream and Elmont areas, with additional incidences in Carle Place, Seaford, Albertson and Hicksville.

Burglars are targeting mostly newer model Mercedes-Benz, Honda and Toyota vehicles and typically commit these crimes overnight between midnight and 4 a.m. According to Detective Lt. Richard LeBrun, the thieves are very fast, removing the tires and/or rims within 30 seconds.

The NCPD said that thieves may loosen lug nuts from vehicles and return to the location in the early morning or commit the larcenies during periods of heavy rain when noises remain undetected by the resident. Vehicles are being left on jacks, cinder blocks or paving stones.

To prevent these crimes, the NCPD suggests that residents make sure their driveways are well lit throughout the night, install surveillance cameras that can alert them to movement in front of their home, purchase wheel locks and utilize their garage for overnight parking.

LeBrun said that there is no description of the vehicle or suspects at this time, but that the Asset Forfeiture Intelligence Department is investigating and the number of patrols in Valley Stream and Elmont have been increased.

Residents are urged to be vigilant and report any suspicious vehicles or people in the area, as individuals may be driving around looking for the targeted vehicles prior to committing the crimes.

If you believe you may have been a victim of these larcenies, call 911 immediately. If you have information that could lead to the arrest of the individual(s) responsible, call Nassau County Crime Stoppers at 800-244-8477. All calls remain anonymous.