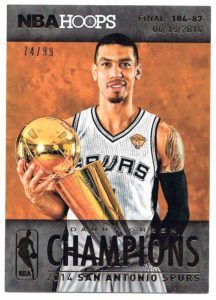 San Antonio Spurs shooting guard/small forward Danny Green will be hosting Team Green Basketball Academy at St. Mary’s High School from Aug. 15 to 19, from 9 a.m. to 3 p.m. each day. The camp is open to children ages 5 to 18 of all skill levels. The $400 fee includes a T-shirt, lunch, drawstring backpack and contest prizes.

Green attended high school at St. Mary’s in Manhasset, where he led the school to a number-one national ranking and was selected to be a McDonald’s All-American. He went on to play collegiate ball at the University of North Carolina. During the 2008-09 season, the North Babylon native led the Tar Heels to a national championship over Michigan State. He is currently heralded as the winningest player at UNC, with 123 career victories in games he played in. One of the most notable aspects of his game is his versatility. Green is the only Tar Heel ever to have 1,000 points (1,368), 500 rebounds (590), 200 assists (256), 100 blocks (155) and 100 steals (160).

Green has just finished a very special season with the San Antonio Spurs, where he helped lead them to a 67-15 record, the second best in the NBA. Widely regarded as one of the best shooters in the NBA, Green finished the season shooting 41 percent from the 3-point line, one of the top percentages in the league.

“I’m really excited to host a camp in Manhasset. I loved playing at St. Mary’s, and have built a great relationship with the town. I’m looking forward to seeing lots of familiar faces,” Green said.

“Team Green Basketball Academy is the best camp I’ve ever attended,” explained Andrew Murray, a seventh grader who attends Green’s camp in North Babylon. “Being able to learn from Danny and the coaches/trainers who have worked with other NBA players was so cool. I learned so much.”

The camp is limited to the first 110 registrants and is based on a first-come, first-served basis. To register, send a check or money order payable to Team Green at PO Box 6391, N. Babylon, NY 11704. For questions, contact Danny Green Sr. at coachdrg2000@yahoo.com.