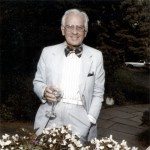 How does it feel to be 100 years old? Just ask Murray Seeman, former Great Neck Estates mayor, long-time community leader and newly minted centenarian. Murray turned 100 on Monday, July 7.
As family and close friends joined Murray to celebrate, he said that the most important part of a plan to live to 100 is to “nourish yourself, your body and your mind … educate yourself.”
Long, lively conversations with Murray reveal a wealth of knowledge of all subjects and firsthand experience that does indeed go back a century. He was born just days before World War I began and served overseas during World War II as captain in the Sixth Port Headquarters.
A firm believer in public education, Murray attended public schools for his elementary, middle school and high school years, going on to Brooklyn College and Columbia Law School.
An attorney by profession, Murray and his wife Lee Seeman (North Hempstead Town councilwoman) have lived in Great Neck for almost 60 years, and much of that time (until just a few years ago) Murray had his own practice in Great Neck.
“I was always interested in village affairs,” Murray told the Great Neck Record just a few days before his birthday. He was a civic association president before he moved to Long Island—for the “beautiful community and good schools”—and served the Estates in that position before his eight-year term as mayor. He built his own home in Great Neck.
Murray loved his time as mayor. “I could do it again,” he said. “I did a fairly decent job; village residents liked me and I was elected three times.” The best part? “I loved solving problems,” he answered.
The Seemans, including their three children, are world travelers. With a passion for archaeology and Biblical history, Murray visited fascinating, far-away places, eventually lecturing on his studies. He and Norma Kershaw founded the North Shore Archaeology Society.
Along the way, thanks to Murray’s keen worldwide interests and Lee’s involvement with Democratic politics, Murray tells of “meeting everyone.” And he has his own opinions.
At 100, Murray still has opinions on almost all public officials, past and present. Although he is a very strong supporter of Hillary Clinton for president, he also had kind words for the two Bush presidents. “The Bushes did credible jobs,” he said. “You can’t expect perfection.”
Murray Seeman’s love for life and lifelong learning continues. So, Murray, how does it feel to be 100?
“Wait another 100 years and I’ll answer,” he says.
And then he dances out of the room, looking forward to his second hundred years.