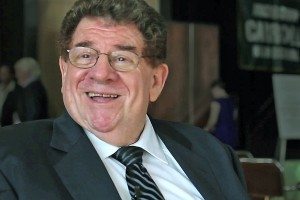 Ask anyone who worked with him or took part in one of his musical productions in Great Neck, and you’ll understand why the late Dan Tomaselli will be remembered as a very special person.

Tomaselli, known by his friends, colleagues and students as “Mr. T,” stunned the Great Neck North Middle School community when he unexpectedly passed away at 71 in July four years ago. But his memory will be preserved and honored on Sept. 27 at 1:30 p.m., when the school’s auditorium at 77 Polo Rd. will be renamed in his honor.

He was the school’s performing arts director and music teacher for over 20 years. He insisted that students call him “Mr. T” because he felt that it would be easier to pronounce than his last name.

“Dan was No. 1 on the gentleman list,” said Betty Brody, a reading teacher, who is in her 18th year at the school and one of the staff members who worked to secure the renaming of the auditorium. “He was just a friendly man, a kind man. Dan’s passing really brought a lot of us together. There was a common goal to support each other. His death hit a lot of us very hard.”

“I’m sure I am among many who say that Dan was bigger than life,” added Joe Rutkowski who worked closely with him and is now the Instrumental Music Director at North High School. “He loved kids. He loved making them into caring persons. He always requested lunch duty so that he could find the toughest boys and ‘twist their arms’ to be in the musical. He put kids on the stage that no one would ever dream of encouraging.”

Rutkowski recalled his own early days in Great Neck when he first met “Mr. T.” “Very quickly, Dan became like a big brother,” he said. “Even though I was supposed to be Dan’s supervisor, I consulted his wisdom nearly every day for the next 20 years.”

“Dan taught five music classes every day. He made sure that every student understood the significance of the arts. He always served the best interests of our students. I miss him terribly. We’ll dedicate our performances in memory of his high standards and incredible understanding of his fellow human beings.”

Art teacher Elaine Brendel also fondly remembered her first encounter with Tomaselli. “He brought me aboard during my first year of teaching at North Middle School in 1990,” she said. “I had made the mistake of walking through the auditorium during a rehearsal and commenting about some aspect of the lighting system. He immediately questioned me about my expertise and basically told me that I would be working on the next production.

“He was a trusted colleague, friend and paternal figure to me,” Brendel continued. “He had a huge heart. He was driven to get the most out of those around him. He certainly got the most out of me and the hundreds of students he touched through the years.”

“I have great memories of sitting with him in the auditorium after the last of the students had gone, talking about life, his family, my family or the latest issue at the school. I still feel his presence in that space. It is only fitting that the auditorium be named in his honor. It will be great to hear ‘Please report to the Daniel J. Tomaselli Auditorium’ on the public address system from now on.”

Tomaselli, himself, was a gifted performer, an operatic tenor who sang in several countries in Europe and North America.

“Dan was such a man of character,” added Brody. “When you think of Dan it was dignity, character and heart. He saw the ‘good’ when you couldn’t see it for yourself and he gave you value when you didn’t think you had any value. We hope that his auditorium dedication will remind people of the memories that we shared and also to inspire those that didn’t know him. And now when our students ask, ‘Who was Mr. Tomaselli?’ it will be a teachable moment.”