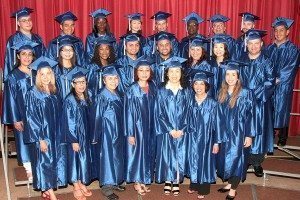 Other significant graduation awards include Barstow and Scott Moss. A look at the winners of these awards follows.

The coveted Frederic Duclos Barstow Award was established in 1962 by Françoise and William Barstow in memory of their only son who died of pneumonia at age 35. The Barstows were prominent Great Neck residents after whom Barstow Road is named. Recipients of the annual Barstow Awards must be in the top 10 percent of their class and be “outstanding in leadership, citizenship, scholarship and service.” Each recipient receives a monetary prize.

Jessy Lin, Daniel Hanover and Sherry Yang, as the high academic achievers of their classes, were previously featured in this newspaper.

Maxwell Nettler was an Advanced Placement Scholar with Honor (earning perfect scores on his four exams) and a National Merit Commended Student. He was Model Congress President, DECA Vice President and an officer of Amnesty International. Maxwell served as assistant section editor and columnist for The Southerner, the school newspaper; played tennis for four years, both JV and Varsity; and was a four-year member of the Concert Band and Symphonic Band, playing drums. He will attend the University of Pennsylvania in the fall.

The recipient of the Scott D. Moss Memorial Award, given at South High School, is Ji Ann Greenberg. This award was established in 1977, in memory of Scott, who was an outstanding South student until his death from cancer. The award is given to a graduating senior who exemplifies the “service, concern, interest, and ability of Scott Moss.”

Ji Ann Greenberg is an Advanced Placement Scholar, a National Spanish Exam bronze medalist and a recipient of an Outstanding Physical Education Award, Nassau Zone, New York State Association for Health, Physical Education, Recreation and Dance. She was captain of cross country and winter and spring track teams and president of the Girls Varsity Club and Gay Straight Alliance. Ji Ann was a student representative to the Building Curriculum Group and a member of student government, Key Club and Midnight Run Club. She played trumpet and baritone horn in Jazz Band and also plays piano. She plans to attend the University of Illinois at Urbana–Champaign.