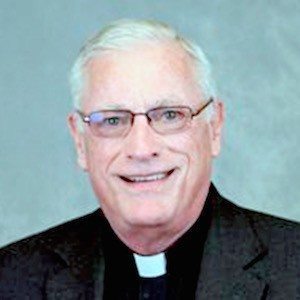 With summer just around the corner, many look forward to sunny days, swimming, playing tennis, playing golf…but many here in Great Neck are experiencing sadness as Monsignor Brendan Riordan, longtime pastor at St. Aloysius Roman Catholic Church, prepares to retire and move to Florida. Msgr. Riordan first came to Great Neck in 1970, left for quite a few years, then returned in 1998. A warm, approachable man, the monsignor is a friend to all he meets, offering peace and comfort to his many friends of all religions.

A devoted congregation at “St. Al’s,” Great Neck’s majestic 102-year-old church on Middle Neck Road in the Old Village, will celebrate Msgr. Riordan’s last mass as head of their church on Sunday, June 21, the day that is actually the Feast of St. Aloysius, and enjoy a farewell reception, also marking a bittersweet Father’s Day.

Msgr. Riordan came to St. Aloysius in 1970 as a newly ordained priest. He was assigned to St. Al’s until 1975 and then reassigned. Msgr. Riordan returned to St. Aloysius as pastor in June 1998. “Almost a third of my life,” he said, explaining that once you leave a parish, you generally do not return, but return he did, eager to help the community he loves. “My heart has always been here,” he told the Great Neck Record two years ago at the church’s 100th anniversary celebration. And through all the years as the church’s pastor, the monsignor says that his goal has been to unite all facets of the Great Neck community and this, he says, he has accomplished. Today St. Aloysius Church has not only an English-speaking congregation with members of many generations-old Great Neck families, but also a Spanish-speaking congregation and a Korean congregation. Although Msgr. Riordan remains the head of the church and does many of the formal celebrations such as weddings, there is also a Spanish-speaking priest and a Korean priest. And along the lines of uniting Great Neck, Msgr. Riordan holds cherished friendships with several local Jewish temples and has often spoken at Temple Beth-El and Temple Emanuel, with warm responses at both temples.

Msgr. Riordan is a Long Island native, born in Amity Harbor on the South Shore. He attended Chaminade and went on to St. Pius High School, then to St. Bonaventure in upstate New York. He eventually went on to further degrees, including masters degrees and studies in psychology and anti-addiction studies, all with the hope of helping his fellow man. Not to anyone’s surprise, Msgr. Riordan will not retire in the traditional manner. Being a priest is not a job; it’s a “vocation,” he told the Record during a recent interview in his warm and inviting rectory. Two close friends, both priests with small Florida congregations, will enjoy the possibility of some time off while their congregations continue to thrive with Msgr. Riordan at the helm during short vacations.

St. Al’s new priest, Rene Tapal, will assume leadership come mid-June, although Msgr. Riordan expects to remain in Great Neck at least through the end of this summer. All in Great Neck who have had the special opportunity to enjoy a friendship with Msgr. Brendan Riordan will miss the true friend whose door, and heart, was always open to his friends of many faiths. Great Neck wishes Msgr. Riordan a well-deserved retirement with lots of new friends and many opportunities to spread the love and the caring that Great Neck has enjoyed for so many decades. Msgr. Brendan Riordan will be sorely missed by all.