Former Great Neck resident Michelle Medoff performed in LA on the famous Sunset Strip, the mile-and-a-half stretch of Sunset Boulevard that goes through West Hollywood (well-known for its boutiques, restaurants, nightclubs and rock clubs), this past October. The talented singer and songwriter will also be running for Miss Californa USA Dec. 4 through Dec. 6 at the Long Beach Terrace Theatre in Long Beach, CA.

Medoff, an artist on the rise in LA, played seven songs on the Sunset Strip, two of which she has written herself and will be releasing in the near future.

Medoff said she got into competing pageants on a whim and it has now become one of her passions. She said, “It’s something I fell in love with for personal reasons, and also philanthropy is such a big part of it”. 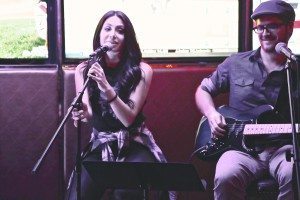 Medoff is an alumna of Great Neck South High School and Hofstra University, where she graduated with a degree in broadcast journalism and political science. She has only recently focused and worked on her love for music, and has worked as an actress, singer/songwriter and model for several years. Medoff left the East Coast for the West Coast in order to earn a living and pursue her dreams. She said, “I’ll always be a New Yorker deep down, but right now California is the place for me. I love everything about being here and I’m glad I took the leap of faith!”

Medoff recently performed at LA’s Bar 20 and has also performed in other venues around the city, including Couture LA, Busby’s East and Pour Vous. With her diverse blend of musical influences, the singer has performed songs from many artists from Metallica to Ed Sheeran, Rihanna and Fetty Wap.

Medoff is a star on the rise. This woman of many talents has many more performances ahead. Catch her competing for the Miss California USA 2015 crown on Dec. 4 to Dec. 6.